This weekend I went home to see my family to celebrate my birthday (it's coming up this week). It was fun seeing my parents and Munchkin, my little sister (By the way she would like me to say that the pictures I posted of her before "look nothing like her", she's "not that weird" and is forcing me to post better ones at some point). When I got home they had some cute presents laid out on the table.
My family has been really supportive of my new passion for running and are almost as excited for my race as I am, so all of my presents were running-themed or for the race. After blowing out candles on my MASSIVE cupcakes...I got to open up the goods. First I got an iTunes card from my brother to update my workout playlist. Next was a whole bag of running goodies from Mom, including Gatorade (i have an addiction), blister bandaids straight from the gods, a new sports bra, and fuel. The next thing I opened up was a really special present from mom. It was a necklace that she had engraved to say "Breathe and Believe". I think that's just about the most perfect saying for me. It also has a princess tag (for our race) and a crown and a black pearl for luck. I tried to get a good picture, but I'm miserable with that stuff so here's my best attempt: 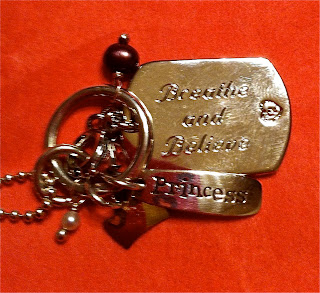 The big thing I asked for was spending money for the trip. Daddy didn't like the idea of boring cash, so he gave me some pasta (for "carbo-loading" all week before) and then gave me money with funny post-it notes attached to tell me what each bill was for. Here's what they said: Snacks at the airport, petit fours at Publix (ps: if you haven't tried them, you are missing out on life), Old Key West gift shop (our hotel), drinks in lobby bar,  running gear at expo, more expo stuff, present for dad, first aid stuff, crutches and my favorite:
I also got some comfy sandals made out of this cool squishy material to wear after the race. I'd say I made out like a bandit! Do your birthdays/holidays look like a running store exploded too?
I can't believe I have less than a week left!!!!