Back on track! (Plus a review)

I'm back! After a week off of running I'm back and just in time for some beautiful weather! It's a little toasty, but I'll take it! 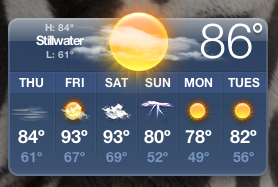 On this bright and sunny day, I decided I'd review a new favorite of mine: The SparkleTech Skirt from SparkleSkirts

I'll start by saying I used to think running skirts were just dumb. I felt like they were only flattering if you are a size zero, because you can't really wear them with my typical oversized men's tech tee. I've got too much to worry about while running, I don't want to add muffin top to the list. And I thought they were mainly for those really girly type of girls. I can be girly at times, but when I'm running (except of course at Disney) i'm all about the all black and tough as nails look, because if I can't run fast, I should at least look fast, right?! Then a chain of events led me to the wonders of running skirts. First, when my mileage increased, I was having chaffing issues in all of my shorts. I then tried out compression shorts, which worked, but make me feel a little naked and still aren't great. Then, at the princess expo, I ended up listening to the SparkleTech Skirt pep talk from one of the women running the booth. They sounded nice, but I still wasn't going to try on.However, my mom did and I thought, I might as well just so they won't keep bugging me to try it on. After I tried it on I was hooked.

The skirt has a pair of compression shorts underneath. They are nice and tight and keep my muffin top under control as an added bonus! They also have pockets on both sides that are great for smaller items like keys, cell phone, id, or fuel. At disney world I kept my phone in it all day and it didn't budge. One thing about the shorts that I will say is that they are a tad longer than the skirt, so they do show sometimes. I personally don't mind because it makes bending over to tie my shoes a little easier. On top of the shorts is a flowy skirt that's very figure flattering. Most running skirts I've seen are pretty straight, but this one is a little fuller, which I really like. There's also a zipper pocket at the top of the skirt that goes all the way around the waistband. If you wanted to, you could fit a lot of stuff in there and wouldn't need a running belt. I'd rather bring my iFitness belt just because I like to wear my shirt untucked, but it's really up to you. If you use it, it works, and if you don't want to use it, it doesn't get in your way at all. The skirt comes in a few colors, we saw more at the expo than are online, but mine is pure black. I'd definitely recommend these, especially if you aren't sure about running skirts or have had problems with chaffing.

Anyways, I wrote another post for healthcentral.com about stress and asthma. Check it out, especially if you're a wheezer.

Do you like the running skirts? Have you ever tried sparkletech?
Posted by Ros at 5:34 PM