Blaze through the Adventure District 5k

A few weeks ago, I started looking for some fun summer races to get me through the lull between distance running season. A race that immediately caught my eye was the Blaze through the Adventure District 5k. The race benefits the Limbs for Life Foundation here in Oklahoma. The Limbs for Life Foundation is an non profit organization "dedicated to providing fully functional prosthetic care for individuals who cannot otherwise afford it and raising awareness of the challenges facing amputees". I thought this was a really great cause, but I have to be honest. I rarely think much about the charity aspect of the runs when making my choices of races to run. The course is what really got me interested, but later I was reminded again of one of the most important reasons why I should run. I signed up for the race and a few days later received a personalized letter in the mail thanking me for my donation (in the form of a registration fee) and telling me a little about how they use the money to improve the lives of amputees.
I thought this was a great idea and it really made me remember that running provides a great opportunity to not only do great things for yourself, but also for others. I've done several races now, and this was the first one I've run where I really felt the personal touch of charity involvement in the race despite the fact that all of my major races have benefited a non-profit organization.
This morning I arrived at the race early to pick up my bib and shirt and stretch.

As I mentioned earlier, I was originally excited about this race because of the course. The 5k course made a loop around the Oklahoma City Zoo, then exited the zoo and crossed the street to enter Remington Park. At Remington Park, we ran a loop around the horse track and finished our race at the end of the loop. The zoo is one of my favorite places and is a special place for me and my guy Cameron, because some of our best dates were there. We actually got a brick together a few years ago, and before the race I went to check it out again.
Then it was time for the race to start. It was HOT! I felt like I was melting just waiting for the gun to go off. My mom was just watching this race and offered to take pictures (because she had surgery Wednesday and wasn't cleared to run yet). I quickly told my mom that I wouldn't be making it in at my usual time because of the heat and then I was off.

The course was fun and there was always something to look at. We passed vultures (kind of intimidating when you look like you're dying and they look hungry), hyenas, deer, wild dogs, and cheetahs among others. A lot of the animals weren't out due to the heat, and I was pretty focused on keeping moving, but I'm sure we passed more than that. The hyenas were my favorite because they were just watching trying to figure out what we were up to. After passing through the zoo I crossed over into the horse track. On the way I passed my mom and waved hello.
After passing Mom, I met another runner my age and she and I got talking. She's doing the Princess Half Marathon next year and it was fun to chat (and push each other) the rest of the way. (Thanks for the encouragement Witney!). Running on the track was fun, but much longer than I thought. I have seen races like the Kentucky Derby on TV, but never went to an actual race before. I was very surprised at how huge the track is! Soon I was pushing through the finish line. I grabbed a Powerade and met up with Mom. My time was really slow, but the heat was intense and I decided to take it easy because I have to work tomorrow and didn't want a second go around with sun poisoning and dehydration.
All the runners were given free admission to the zoo after the race, so Mom and I went for a couple of hours to take pictures and enjoy the day. 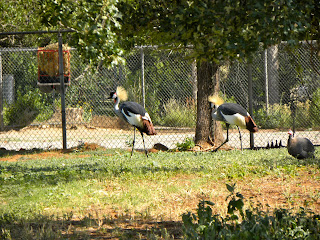 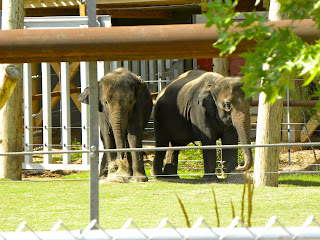 The good
The bad
Overall I really loved this race and would recommend it to anyone looking for a fun race, but not necessarily a PR. I feel very inspired to run after today and I will definitely be repeating this race in the future. Thanks Limbs for Life and DG Productions for making this such a wonderful race!
Posted by Ros at 2:05 PM

Email ThisBlogThis!Share to TwitterShare to FacebookShare to Pinterest
Labels: 5K, blaze through the adventure district 5k, charity, limbs for life, Race Report, why i run