What would you do for race bling?

Apparently, I'd enter a 5k with pneumonia for some bling. Pathetic.

So a couple weeks ago, I was on the hunt for some fun races to do this fall and found the Spirit of Survival. The race is super-hero themed and has a "Hulkin' Half Marathon"and a"Super Twins Half Marathon Relay"and a "Superhero 5k". By the time I found out about it, I felt like I didn't have enough time to prepare for a half marathon, so I instantly signed up for the 5k.

There are a few things I look for when I'm trying to pick a race. The most important one is the cause. I love running races that benefit others. One of my favorites from this year was definitely high on the list because of the cause. The Superhero 5k benefits cancer research, so that's one requirement down! After the cause, I'll be honest: I love the swag. The Superhero 5k not only gives out medals to all finishers, they also give out tech tees to all participants. Yes please!! Finally a fun atmosphere is high up on my list of reasons to love a race. All races are fun, because runners are just awesome people. However, some have a little extra "fun factor" going on, and that's a huge perk in my book. The superhero 5k "strongly encourages" dressing up as your favorite superhero. Yay!!

Well there you have it. Even though I'm still recovering, I can't NOT run this race. I've been really excited for it for a while. Should I probably be at home? Yea, but I plan on taking it easy and making the weekend about fun and supporting other runners.

Saturday I'm driving there and going to the packet pick-up and pre-race pasta party at the park. My bf has some awesome connections, and scored me and my madre (who is also running) a hotel room in town for that night. Then sunday I'll be waking up early to "run" (more likely cough/walk) the 5k. After the race there is a post-race expo with vendors and I'll also be hanging around to support the half marathoners (because we all know I wont be finishing after any of the 5k people).

In other news, I finally got my hair cut and it feels great! My hair has been in need of serious help since 2010. Like for real, if you cut off my dead ends, I would be bald. Who knows why I put off hair cuts, because I always love the way I feel after. Yay for soft hair! 5+ inches gone and I feel so much better. Ah! 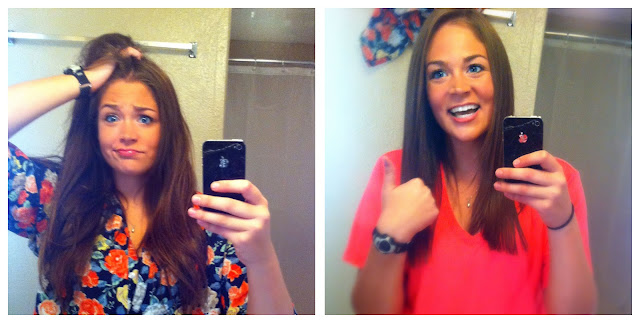 
Am I the only one that puts off hair cuts for a year for NO reason at all? probably.

What are you're three things you look for when picking out races? Fun atmosphere, swag, and a great cause!

Email ThisBlogThis!Share to TwitterShare to FacebookShare to Pinterest
Labels: Asthma and Running, pre-race