Friday morning my family and I woke up bright and early (4 am!)  for the Walt Disney World Family Fiesta 5k and everyone got dressed up. I wore my donald costume...

Ashley and Alex dressed as poncho-wearing caballeros (the theme of the race was three caballeros)...


And mom decided to be boring and skip the costumes this year...haha. Once everyone was ready to go, we left our hotel rooms (and my dad who promised to "vigilantly guard our rooms from pirates" while we were gone) to go downstairs and catch the bus.

If you've never run a Disney race before, here's how it works:
If you're staying at a Disney hotel, you get on a bus to the race area at an ungodly hour. The bus drops you off at the pre-race area. In this area there is a place to check your bag (a bag given to you by Disney that can hold all of your post-race gear) and a fun waiting area where you can meet up with friends and get excited while you wait for the race to begin. There's always a fun dj playing music and teaching everyone fun group dances to help warm up before the race. Once it's time for the race to start you walk to the start line.

The fun thing about the 5k (rather than the half marathon) is that the start line is RIGHT next to the pre-race staging area, so you can take your time and enjoy the music, have some fun, and even watch earlier corrals (faster runners) start the race before you. At the half marathon, you've got to walk a mile to the start line leaving less time for the pre-race area and the nerves are much higher so there isn't nearly as much excitement in the air.

Before the race, there was definitely a party "let's have fun!" sort of vibe going on. Everyone was following along with the dj's goofy dance moves (for a good laugh sometime, you should really watch pre-teens mortified faces as they watch their mom and dad do the "wobble"). I think because the distance is shorter, most of the first-timers are less afraid of not finishing the race and more excited to be there.

My family and I huddled together and tried to stay warm before the race started. Soon the dj called the first group of runners to start. There were three waves based on expected pace times and when the dj called your group, you were supposed to go past the gates to the start line.

Soon it was our turn to start and we were off. Alex and Ashley left Mom and I in the dust within the first few minutes of the race and we wished them luck. One awesome thing for Disney fans to look forward to at these events is the "backstage" scenery along the route. The first mile of the race was completely filled with backstage goodies. We passed what looked like the graveyard for all of the parks broken down vehicles. There was a bunch of old trams used to transport guests from the parking lots to the park. Then we passed an old jungle cruise boat.

After that we entered EPCOT near the Mexico pavilion after running under the outdoor loop of test track.

At this point in the race, my mom's "happy feet" were getting out of hand and we split up too. Near the start of every race my mom gets what she calls "happy feet" and she wants to run off and forget pacing. I really wanted to walk the race and stop for pictures so that I'd feel nice and fresh for the half the next day, especially because I hadn't done almost any training. We had been run/walking despite our plans for the first mile, but Mom didn't want to walk anymore. She hates stopping in the middle of a run, and when we came to the first character photo spot, she decided she didn't want to stop and I told her I'd just meet her at the finish. I spent the rest of the race run/walking and stopping for almost every photo, just trying to take it easy and have some fun along the way. I had a great time!

The next mile or so went around world showcase (all the countries) in EPCOT. It was really neat to pass all of the countries and take photos. The view was amazing too.


After passing through world showcase, we went through future world, past spaceship earth....

and out of the park to the finish line. I picked up my medal and my family was there waiting for me.

Everyone had a great race and we went back to the hotel to swap stories about our race experiences. Mom caught up with Alex and Ashley near the end of her race, and got to cross the finish with them. Ashley had fun and wants to do it again next year, except stop to take more photos like I did. Alex had a blast and wants to run a half marathon soon.


I was so proud of my brother and sister, I made them wear their medals all day at the park afterwards. That night we all (Mom, Dad, Alex, Ashley, and I) celebrated at Hollywood Studios and filled up on some carbs for the half marathon the next day. We ended our awesome day checking out one of the last showings of Osborne Spectacle of Lights.
Stay tuned for part three: the half marathon; and if you missed part one of my report please check it out here.
Posted by Ros at 11:47 PM 3 comments:

I'm finally back home from Walt Disney World and my big race weekend. I ran the 5k and the Half Marathon, so I'm going to be splitting up the race report into parts. First up is Preparing for the race!

We arrived in Orlando on tuesday afternoon and then had 2 full days of park time before the first race. Last year I ran my first ever half marathon at Disney World and I learned a few things to keep in mind for the races. Here are my biggest Disney running preparation tips:


Like the list says, I knew from experience that all of these things were important to a successful race day but it's just so hard to listen to them when you're at the parks! Unlike last year, my whole family came along this year. Only my mom and I were running the half, so everyone else didn't care as much about time spent on our feet. They wanted to see the parks and ride all the rides! And, like the little kid I am, I did too.

We spent wednesday at the Magic Kingdom and I got to meet up with a sorority sister (my G-Big if you know what that means) that I hadn't seen since she graduated. It was her first time to Disney World so we went on pretty much every ride. We all did a pretty good job at staying hydrated, but the no-walking plan was a major bust.

On thursday, we went to animal kingdom and then the race expo. I absolutely love Animal Kingdom as a park because the attention to detail is amazing. Every inch of that park has a story and a theme, from the ride queues to the attractions. However, while the theming is incredible, the pavement is also themed and that means lots rough, uneven roads and hard concrete. If you are planning to run a Disney race, save Animal Kingdom for a day besides the one before your race. Aside from our tired feet, we had a wonderful day at the park and were all excited to go check out the expo.

We went straight from the park to the ESPN Wide World of Sports to visit the race expo and pick up our bibs. Alex and Ashley, my brother and sister, were also running the 5k with us. The Disney 5k was Ashley's first Disney race and second race ever, and Alex's first ever 5k. When we got to the expo, they were really impressed with the size of everything and began to get excited for race day!

After getting our bibs and all of our goodies (in 2 separate buildings this time!) we went shopping! The gear at the expo was much less female-oriented than at the princess half (obviously) but we still managed to get a few cute things. There were some great deals on the basics so I bought a plain wicking tee for $10 a Zensah sports bra (review coming soon!) and a water bottle.
After the expo we all went to dinner and Mom and I had our traditional pre-race cocktails! It's really dumb to drink alcohol when you are trying to hydrate before a race, but we had one before our first race and now it's become a good-luck thing that we don't want to break. Anyways, they were super yummy and came with a glowing ice cube!

After that it was time to lay out our gear and get ready for an early race the next morning! 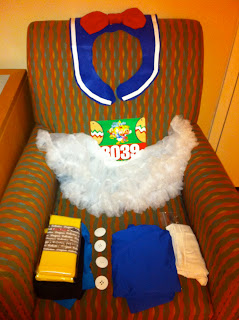 And that about wraps up my pre-race happenings. Stay tuned for Part Two: the 5k!
Posted by Ros at 12:39 AM 3 comments:

Tomorrow morning I'm leaving for my vacation at Disney and the WDW Half Marathon and Family 5k. I couldn't be more excited! In addition to my donald costume (which will be fully revealed next week) I made a sweatshirt to wear the morning of the half marathon to keep me warm before the race starts.

It's really hard to photograph,but hopefully you get the idea. Basically I cut out the mickey head with 13 point 1 cut out inside, then stuck it to my sweatshirt. Then I sprayed it with bleach and let it sit for a few minutes and threw it in the wash.

Q: What are your new year's resolutions?
Posted by Ros at 9:55 PM 4 comments: