FAIL! AGAIN! I started a new job (my first "real" job!) recently so I've been a little wrappped up with things there, but here's where I left of with my race report:

Friday night I went to bed excited for the half marathon the next day. Unfortunately, I wasn't feeling so cheery Saturday morning because I woke up with the flu. I had a sore throat, runny nose, and just felt awful overall. After being pouty for a few minutes, I decided to suck it up and get ready for the race.

Once we were dressed and ready, Mom and I left on the 3:30 AM Bus to the race. Unlike the 5k, at the half marathon the start line is a bit of a walk from the bag check and bus drop-off area. We decided not to waste any time and quickly dropped off our stuff at gear check then walked over to the start area.

The walk is about a mile long and you pass some of the same things you do in the 5k, like the disney "graveyard". Once you finally get to the start line you are directed to your assigned corral. There were 8 corrals plus the elite runners and we were in Corrall F. Here's how the set-up looked. 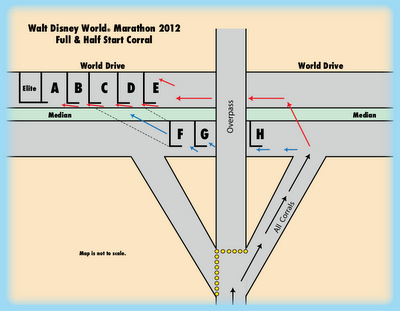 Because we were in Corral F, our side didn't even move until Corral E was gone. I was absolutely frozen and feeling pretty miserable so I just sat down and curled up inside my sweatshirt (I brought a really big one for this reason) and then I fell asleep. I'm usually really pumped up and nervous before races, so the fact that I could fall asleep was a true testament to how sick I really was. Once it was our corral's turn to go, we got up and moved to the start line, where Mom and I snapped a quick pre-race pic. 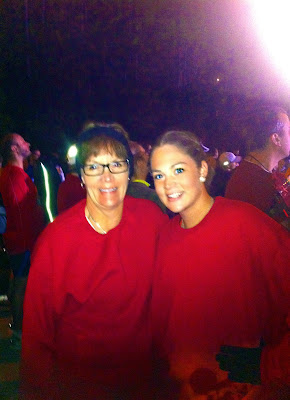 Donald Duck (the mascot of the half marathon) counted us down and then fireworks went off and it was time to go.

Before the race I decided my main goals for the half were just to have fun and take as many photos as possible without getting swept. (If you don't maintain an average pace of 16 minutes per mile including stops for photos you can be pulled off the course).

The first 5 miles of the course are on highways and roads leading from EPCOT to the Magic Kingdom. This part of the race is where the volunteers go all out. We passed high school bands, DJ's, characters, a hot air balloon, spectators, the Team in Training cheerleaders, some really cool old cars and more. While I wasn't feeling my best because of the flu, my legs felt surprisingly okay after the 5k and park mileage leading up to the race. Mom was feeling a little more stiff, so we came up with a system. Every time I stopped for a photo, she would keep walking and I'd just run to catch up to her. This way she wouldn't stiffen up waiting for photos, and I would get my pictures. The first photo of the race was with some really cool Jesters on stilts.
After that we decided to ditch our sweatshirts because it was starting to get a little warmer. Soon we passed the signs that say Magic Kingdom. The signs are way before you actually enter the park; but it's always nice to feel like you are getting close, even if you aren't.

The miles before the park seemed to fly by this year. Mom and I talked most of the way and were feeling really good the whole way. I think having run the course before really helped to make it feel shorter this time around. I also tried to enjoy the race more this year, and I think stopping for pictures was a great choice.
Right before you get to the Magic Kingdom there is this part of the course that goes underneath a miniature bridge and spectators are allowed to cheer there. I always remember it being so loud right there and getting a big rush of excitement before entering the park. Then you turn a few corners and you're inside the Magic Kingdom.

The feeling you get while coming down main street is totally indescribable. You enter the park from a side entrance from backstage. There aren't any spectators back there, and there's only a few cast members pointing you in the right direction. It's REALLY quiet. Then you turn a corner and it's like a wall of sound and excitement hits you. Tons of spectators are cheering, blowing horns, and shaking noise makers cheering you on. The cast members of main street, like the mayor and the dapper dans, are all out there too. You can see the castle in front of you, which you've trained so hard to run through, and it hits you that you really are there. I so wish there was a way to share that feeling with you because it really is incredible. I tried to video-tape it for you at the last minute, but it was a definite bust. Here's what I got:

Sorry about that shaky video! After coming down main street, you enter tomorrowland. I've always loved tomorrowland and it's so cool to see the sun rise over the astro-orbiter and know that no one else (okay no one besides other runners) will get to see it like that.

After a quick turn through tomorrowland, you enter fantasyland. In fantasyland there are always a bunch of characters and we lucked out that the lines weren't too long. Mom and I both stopped for a quick photo with Alice. 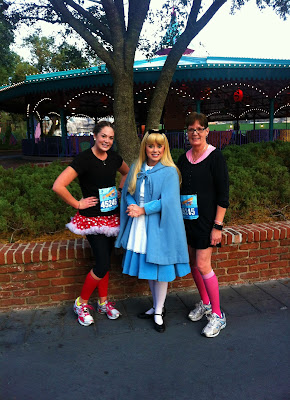 Then I had to clown around with Dumbo. I think this was my favorite photo of the race! 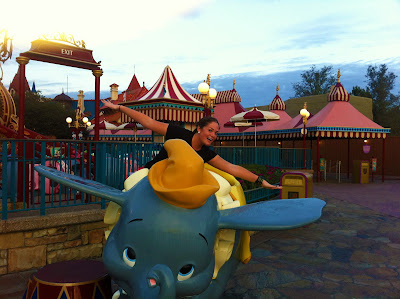 They actually didn't have this set up like a photo-op, he's just an extra ride vehicle there for everyday guests to take photos with. Since most of the runners were busy trying to run to the castle or get a photo with Alice, no one was stopping here and I thought it would make a cute photo.

After fantasyland you run through the castle from the back towards main street. This is another one of those exciting only-at-disney moments during the race. It's very surreal to actually be there. I tried video-taping it, but I failed again.

Once you pass through the castle, there's an opportunity to pose for a quick photo in front of the castle with the official race photographers. At princess last year I didn't get the best pic here, but it was ok. This year the photos were AWFUL. I don't know if it was just the time I happened to be there, but the photographers were really pushy and kind of rude. They didn't hardly give you a chance to smile before pushing you along. Needless to say, I don't have a castle pic to show you from this year.

After leaving main street, you wind your way through liberty square and frontierland. There are a bunch of bathrooms(actual restrooms not porta-potties) in frontierland and not too many runners stop here, so it's a great place to stop if you need to by the way. Mom took a quick bathroom break while I stopped for another fun photo near the Country Bears. Passed the country bears is splash mountain. At that time in the morning they are usually testing the ride with empty boats, which is pretty cool to see. After that you swing passed the train tracks and exit the park through another backstage exit. Once you leave the park, you pass a really cool backstage area where they keep all of the floats for the parades. When I was younger (grade school) I sang and danced at disney in the magic kingdom and remember passing this area in a car a few times. It was really neat to see it again, but this time with old floats out on display.

The next few miles of the course are definitely the toughest. You go back to epcot on a very similar path that you came (and even run past some of the same things on the opposite side of the road). It can be mentally tough if you aren't prepared for it. However, disney staff and volunteers never cease to amaze me and kept runners' spirits high as we ran past. Your bib has your name printed on it and so many random strangers will be yelling your name at this point like "keep it up sara!"and it's really fun. After a few photos, I was in trouble. This is the part where things really started to go downhill for me. I never thought I would have to quit a race before and this one truly had both my mom (a nurse) and I worried that I'd have to stop. Remember that cold I mentioned? Well it turned into a full blown asthma attack. My entire body started to get charlie horses. My toes were completely curled like I was running on balls. My arms and hands curled up to what I like to jokingly call "t-rex arms" and I couldn't move them at all. It was absolutely miserable and I started to turn a scary shade of purple. My mom made me walk and tried to keep me calm. I am pretty good at laughing at myself and not panicking when scary things happen like this, but it was a little hard without a medical tent in sight and my hands getting progressively bluer and bluer. It was absolutely no fun, but I refused to quit and we just kept going until we were in epcot.

This is a random side note, but right as I entered EPCOT I passed Lou Mongello of WDW Radio, who's show I'm crazy geeky about and I was so happy to see him on the sideline cheering on the runners. I was having trouble talking because of the muscle spasms at that point (i know you're jealous of how cool I am) so I didn't get to say hi, but it was still neat to see a disney "celeb". I never got to the point where I could move my hands or my toes, but my arms relaxed some and I got much better color near the last mile of the race. We passed phineas and pherb near the end and snapped a pic. You can see my hand is still stuck in a weird position in the photo :/ After that passing phineas and ferb and spaceship earth we finally made it to the gospel choir. Every half disney has a gospel choir which I always get a chuckle at the "thank heaven you're almost there" vibe you get. haha. Finally it was time for the home stretch and mom and I passed the finish holding hands and then got our medals.

That wraps up the race, I'll have some more post-race stuff and my overall thoughts coming up soon!
Happy Valentine's Day!
Posted by Ros at 10:37 PM 4 comments: