As you know, I've really been slacking on the running front lately and thought the best way to get back into it would be to sign up for a bunch of races, so be expecting more race reports coming your way. The first race on my comeback tour was this Saturday. I ran the 5k race at the Body Shop 5k & 10k event. I stumbled into the race online and saw this description:

I though the description was perfect for my first race back after a long running hiatus and immediately signed up.  And since it was my first race back I had to go in costume right?! The race theme was obviously about working out and getting your body back in shape so I decided to wear some 80s workout gear. I threw it all together at the last minute and this is what I came up with: 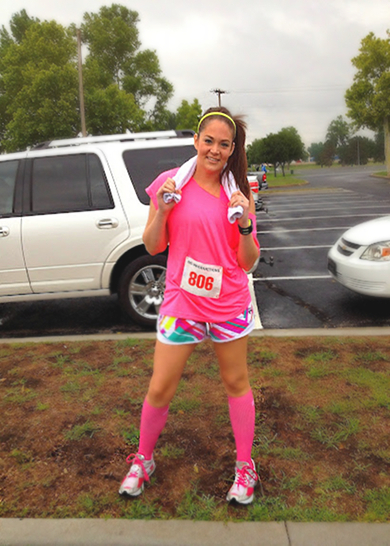 Definitely not my best costume, but I made it work. haha. I took an oversized neon running tee and cut off the color so that it would be a one-shoulder top. Next I added neon shorts and a side pony. I tried finding leg warmers, but by the time I had the idea for a costume, it was too late and I had to go with compression socks instead. The outfit definitely could've been better but it was still fun.

Once I got suited up it was time for the race to start. The 5k and the 10k started at the same time, so it was a little crowded on the narrow paths at the very start, but soon everyone spaced themselves out so that it wasn't cramped at all. The course was a simple out-and-back course with different positions marked for the 5k and 10k turnaround. Mom was with me again, and we decided to take it nice and slow. It felt really good to be back out there again, even if our time was slow.

Now you know it's been a while since I've blogged because I completely forgot to take pictures! The whole race I was just chatting with mom and glad to be running; so much so that I never stopped to grab a quick photo. I'm sorry for the boring photo-less recap and promise to use my camera next time!

After the finish, there was a little party with beer, hot dogs, and awards. We stuck around for the awards because my mom usually places (by default but shh!). This race we both placed (again not because we are fast, but because our age groups were small) and we got awards for placing in our age groups. I got 2nd in mine and she got 3rd in hers. Anyone receiving an award got a souvenir glass. 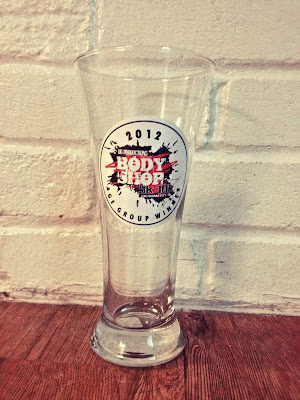 Overall it was a fun race. Here's my race breakdown: