Before I start the race report, I'd just like to say last weekend I was supposed to run a zoo run and the lovely ladies at Tough Girl Tutus sent me an awesome leopard print tutu to review. I'll post a review of it soon, but I got sick and didn't get to race in it yet :( Please go check out their site because the tutu is adorable and great for running!

Ok back to the report: This weekend was the River Run and Dog Jog for New Leash on Life. New Leash on Life is an awesome organization that helps train service and therapy dogs and provide them to those in need. Obviously this is an awesome cause and I was really excited to run the race. There are two options for races, the 5k and the 3k dog jog. The races are at separate times, so I chose to enter both races. My mom ran the 5k with me and my sister walked the dog jog with me. Since the race was on memorial day, you can bet I didn't miss another opportunity to dress up, and we all went as sailors. 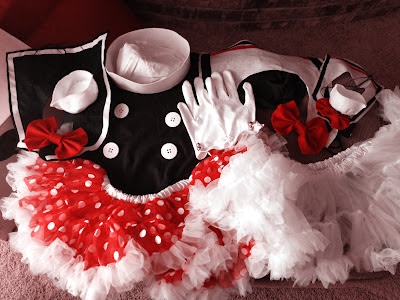 Gear all laid out

Monday morning we woke up and headed to Wiley Post Park. The volunteers for this race were phenomenal and I quickly got my race packet and bib and then started to get ready. By the way, the race included tees for the humans and bandanas for the puppies. The first race was the 5k so my awesome sister helped me and my mom get ready while wrangling the dogs for us. Big tip if you've never done a dog run: No matter how well behaved you THINK your dogs are, get to the race extra early. It takes much more time to get everyone ready with a dog. I grabbed a quick pre-race photo and then it was time to head to the start.


The race was a simple and flat out and back course (which seems to be the case with all of the OKC 5ks). I was still recovering from being sick, so we took it easy and my mom was a great help to me during the race. I couldn't do all of this running if it weren't for her amazing support. The race was much smaller (in terms of participants) than I thought, but it was really fun. There were lots of volunteers on the course and a few water stops along the way. I will say it again, the volunteers were absolutely phenomenal this race and I'm so glad that there were so many there to encourage the runners. I got quite a few "keep it up sailor!" comments during the race whenever I was starting to feel really sick (yay asthma and colds!) and it helped to spur me along.

Once again I didn't get any pictures during the race, but it was over before too long (thankfully!) and it was time for the dog jog with my sister. The plan for the dog jog was for Ashley, my sister, to carry Buster in a doggy stoller and for me to walk with champ. Before the race we snapped a few photos with everyone in costume.

The race started and I think the dog jog was actually bigger than the 5k. Ashley and I had fun chatting while we walked. Maybe if you started in the very front you could actually run this race, but everyone was walking very slow and we didn't have any choice but to walk. We had planned on this, so we were very happy to walk with the boys.

Having never run a dog run before, I was curious to see how Buster would handle drinking out of a cup. Champ has run with me on training runs before and drinks out of cups or water bottles easily but Buster is still learning how to use a leash. The water stops were well manned and there were several along the way. Each water stop has dog tons of dog bowls lined up so we didn't even end up having to worry about Buster. We just took him out of the stroller and let him drink.

It was really hot out so our main concern was just keeping the puppies safe. I think they had a blast and soon we were rounding the corner to the finish line.

I didn't really get any good pics of it but not only did my sister get the dogs dressed and ready for the race, she also decorated the stroller with garland and star-shaped balloons. Too cute!

After the race we all tried to cool down and waited for awards. My mom got 2nd in her age group again (go Mom!!) and I forgot my timing chip otherwise I would've gotten second as well (by default of course! haha). She won an gift card to a sports store which will be fun! In addition to our awards for running, there were a few fun contests for the puppies and my boys won best costume. They got a large gift basket full of dog treats. 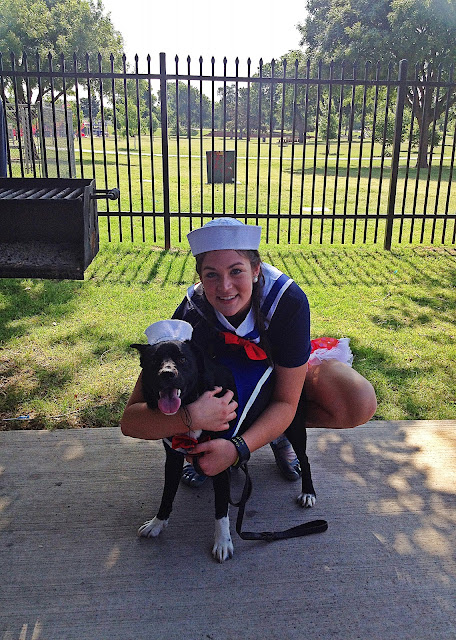 All in all it was a great day and I'm so glad my puppies had fun!And you better believe they slept like babies on the way home