Wine and Dine Half Marathon Weekend Recap Part One

Hey everyone! I've got a lot of posts (and running costumes) that are long overdue, but while it's still fresh in my mind I thought I'd share a quick recap of the Wine and Dine Half Marathon weekend.  WARNING: this will have lots of silly pics and be extremely long winded.

This race my mom and Kevin (my bf) joined me in Disney for the weekend. Kevin ran the 5k with me and mom ran the half with me so I had company for both races! I've done a few Disney race reports already, so I'll try to stick to focus on what made the Wine and Dine races different rather than detail every little thing that happened.

We arrived in Orlando on Thursday evening, rode the Magical Express (Disney's transportation) to the Pop Century Resort, and checked into our rooms. Kevin wanted to rest before heading to the parks, so mom and I walked around the resort and explored some!


After exploring we left for Epcot to grab some food and watch the fireworks. 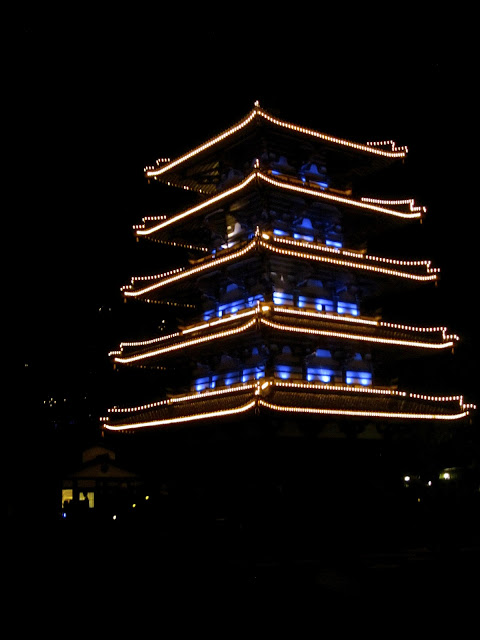 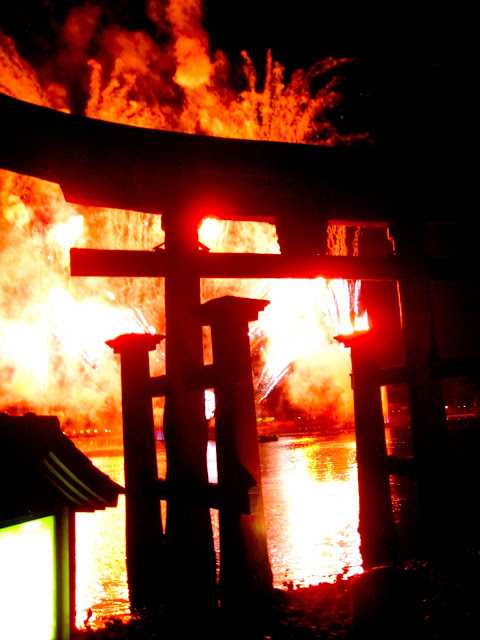 The next day we spent split between Animal Kingdom, Hollywood Studios, and the race expo. For the most part the expo was the same as the other Disney races I have done. You pick up your packets in one building, and the shopping and your race shirts are in the other building. The only major differences I noticed were that most of the official race merch WASN'T totally sold out by the time we got there (late afternoon), including pins which I've never seen at the expos for sale before. Also, there was a lot less "Ooooh! I need to buy that!" going on than I remembered at the other races, but that could just be the time we got there.  I totally spazzed on taking pics for most of that day. Sorry!

Saturday was crazy hectic. It started with the 5k that morning. This was my first Disney race not staying at a "host resort" which means transportation to and from the races isn't provided and you need to call a cab of your own if you aren't renting a car (which we weren't). Kevin and I donned our awesome costumes and headed downstairs. We are both in love with the tv show Phineas and Ferb specifically Perry the Platypus and Heinz Doofenshmirtz, so we both dressed up as Dr. Doofenshmirtz for the race. While we were waiting for our cab to arrive we started snapping some quick photos. 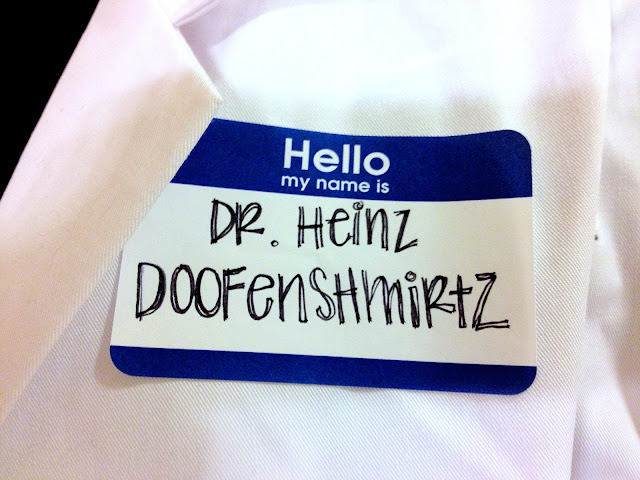 But then we realized that our cab was really running late and did some frantic runs between the phone and the front desk. We had arranged for the cab to arrive with more than enough time to get to the race, even with road closures due to the race, but it turns out our driver decided to pick up another fare instead on the way. How rude!! Lucky for us another family's cab came in time and they had room for Kevin and I to squeeze in. So if you aren't staying at a host resort, plan on getting ready EARLY because it appeared lots of people were having the same issue.

Once we arrived at the race it was a little chilly so Kevin and I were sort of bouncing around to stay warm while we waited in line (for almost an hour!) for a photo with Mickey and Minnie. While we were standing in line, we actually got stopped by one of the race MC's for a quick interview. I've been to a few Disney races, but it was really cool to be interviewed once. He talked to us both about the race and the fact that it was Kevin's first Disney race while photographers and videographers swarmed us. Kind of fun! After that we grabbed our pre-race photo and lined up to start the race.


Soon the race began. The race wound around the animal kingdom parking lot, then through the animal kingdom before finishing back out in the parking lot. The entire course was filled with fun things to look at, Christmas music to go along with the theme of the race (Mickey's Jingle Jungle 5k), and fun Disney characters. It was by far my favorite Disney 5k.

The first part of the race went through the left side of Animal Kingdom (near Camp Minnie Mickey and Africa) passing by the Tree of Life. 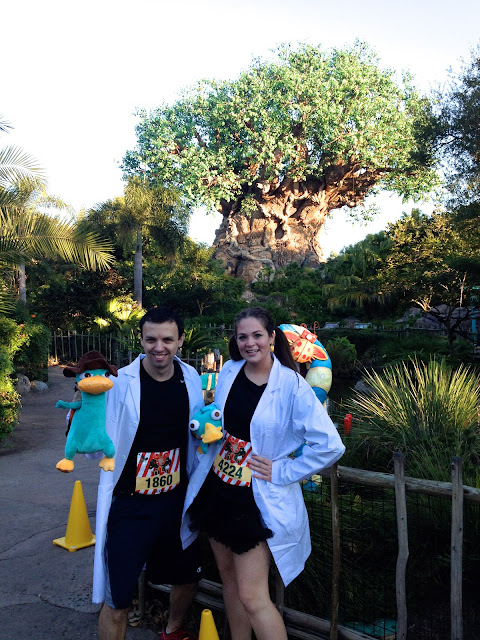 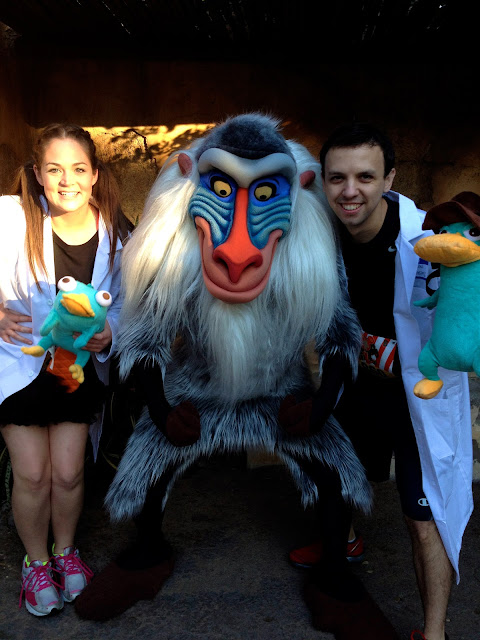 After that portion of the race, we followed a similar route to the trams to Rafiki's planet watch in an easy out and back format. At the furthest point there were live animals to check out including a donkey, a lamb, a really cool owl, and more. 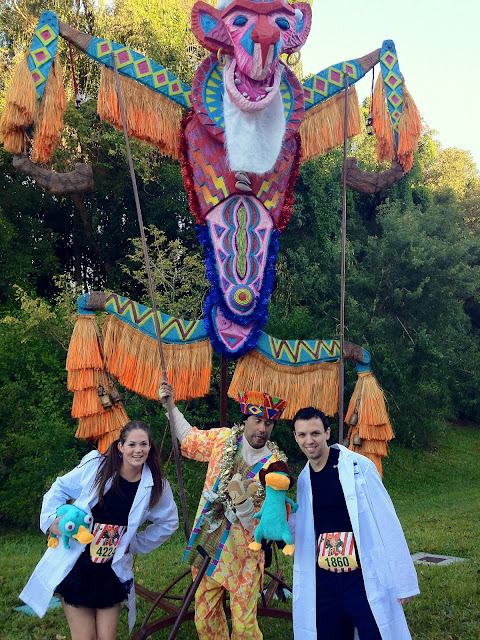 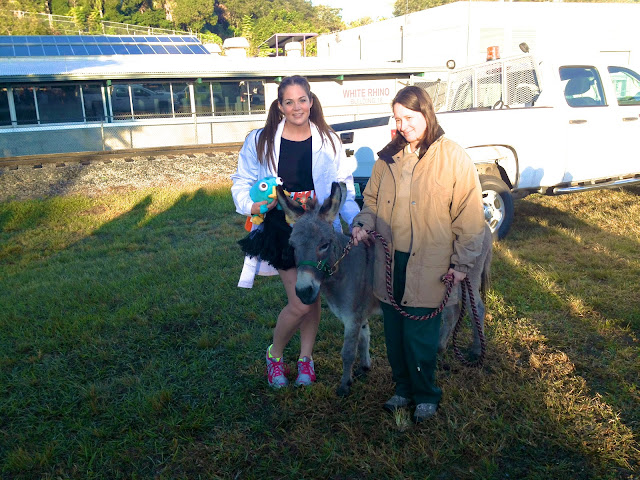 After that it was time to head back into the main area of the park past Asia and Expedition Everest. 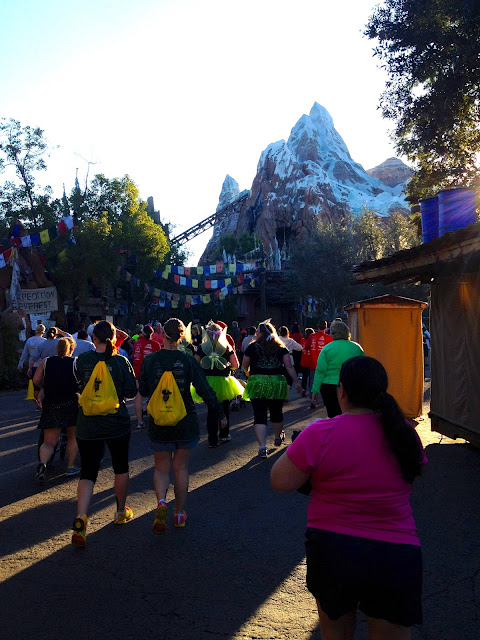 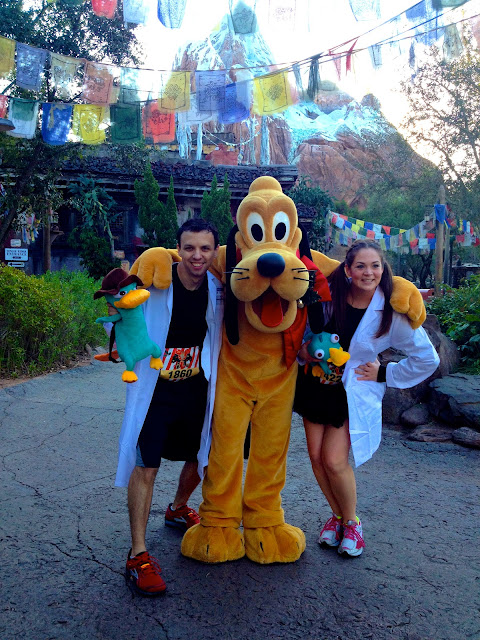 Finally we left the race and ran back out to get our medals. Near the finish line Kevin stopped me and dipped me to give me a kiss! 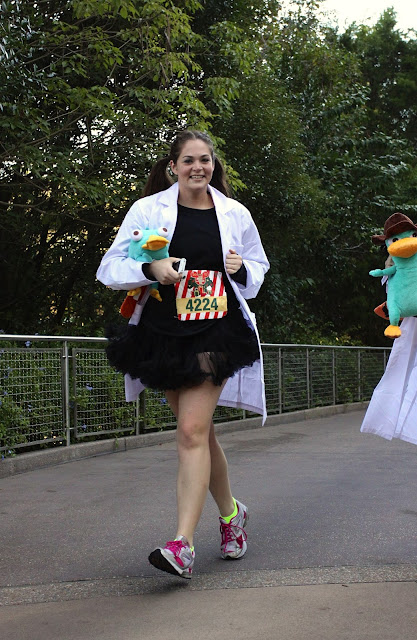 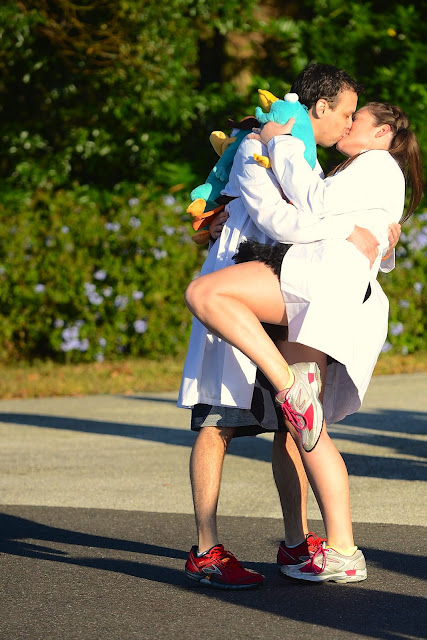 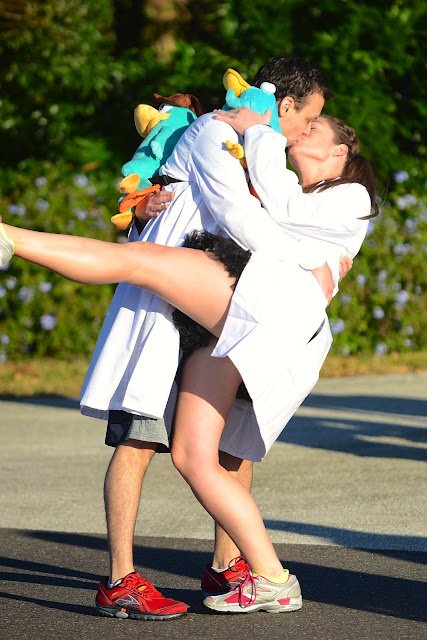 Which turned out to be a fun way to end a race ;) It may even be better than getting the bling: 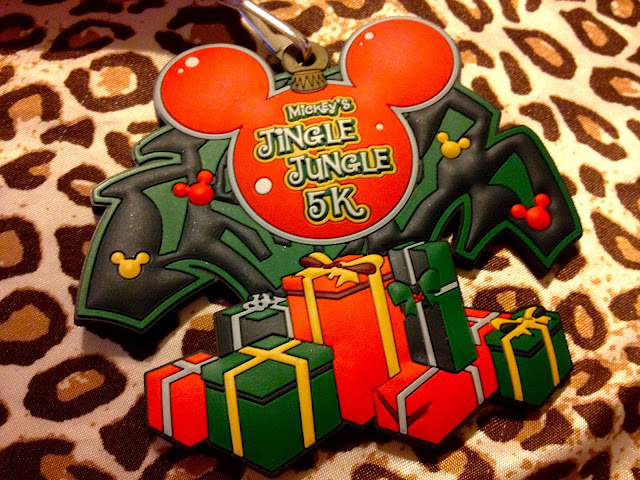 I really thought this was race was a great 5k and absolutely worth the money. I loved the other Disney 5k I did, but I thought the course and the obvious effort put into the race by both the RunDisney team and the cast members made it so much more fun than my previous Disney 5k experience.

Stay tuned for part two (the half marathon) headed your way soon!
Posted by Ros at 4:25 PM