Like most moms of active toddlers I've got a very little free time. I count myself lucky if I can pee alone these days, let alone squeeze in a workout. As a result, I've had to get a little creative in the ways I get my daily burn. After a particularly rough day with Audrey, I was laying in bed trying to honestly think of a point in my day where she was even remotely occupied enough that I could workout AND not in need of my help and it hit me: During her morning preschool shows!

We don't watch a lot of tv around here, but every morning I usually turn on one of the typical toddler shows (like Sesame Street or Sophia the First) and she likes to watch, dance to the songs, and bring her toys to show her tv friends. It's not like I can leave her long, but generally she is occupied enough that I can do my own thing nearby, so that's where I got the idea to create workouts specifically for that golden hour of not-so-free-but-slightly-less-hectic time.

I present to you, The Life's a Wheeze Mommy Workout Series! I will be featuring a new kids show regularly (hopefully once a week) with a workout to go with. I'd love to hear what suggestions you have for shows and any feedback on the workouts (too hard/easy) but I tried this one out and it kicked my booty! I will try to keep these equipment free so that there's even less excuse to miss a workout. I have a few others already started, but the first in the Series is the Mickey Mouse Clubhouse Workout! We love Mickey Mouse around here and Audrey does too.  Enjoy! 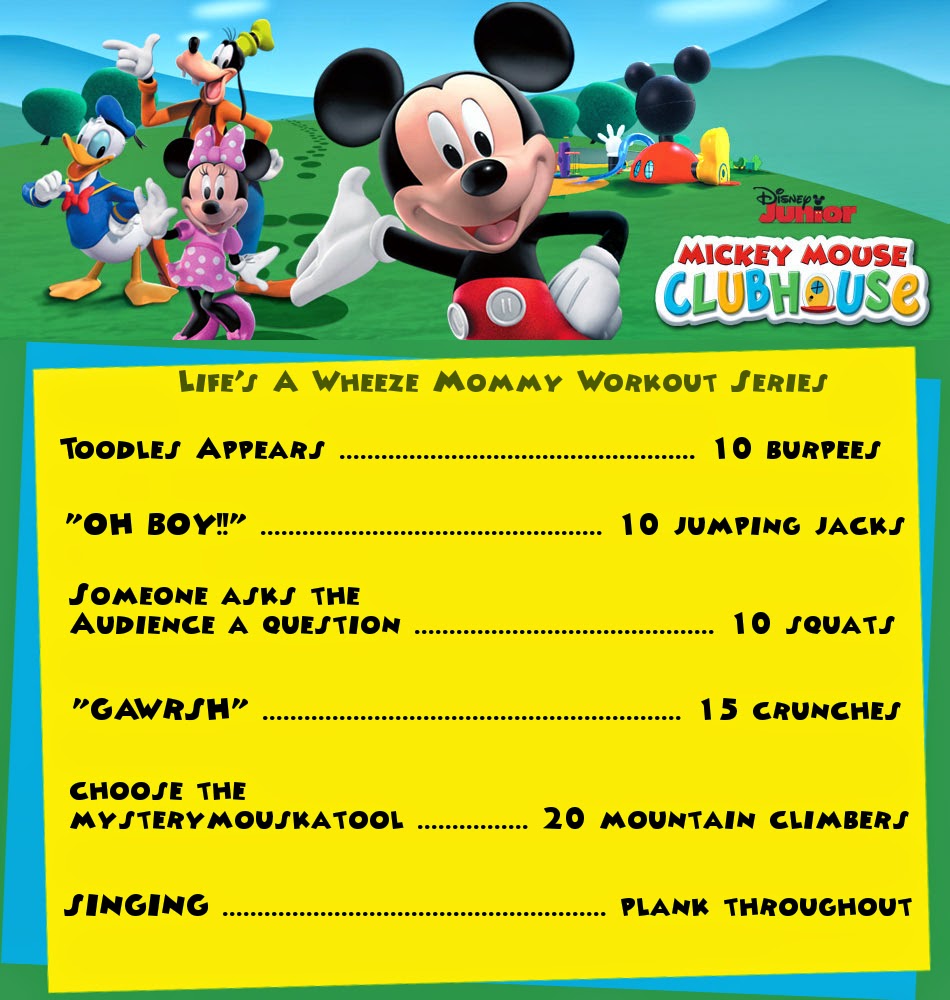 Hey guys! I'm really back! A week ago I ran in my first 5k back after baby and it felt awesome to get back out there!  (Exclamation Point!! Sorry - can you tell i'm excited??)

I had been meaning to do a race for a while now ( I have been walking a lot and even running a bit) but I just haven't felt like I was ready for a race. However lately a bunch of awesome things fell into place:
So all of these things sort of happened at once and then on top of it Kevin's sister (Katie) has started trying to do a couch to 5k program and asked us if we wanted to do a glow run with her again. We agreed and that's how I ended up doing this race.

The race she chose was the Oklahoma City GloRun 5k. Here's a snippet about the cause it supports:

Proceeds from the race will benefit The Referral Center (TRC). TRC is a local government funded non-profit medically supervised detox facility located here in OKC. We provide full medical care and counseling to those going through drug or alcohol rehabilitation.

The race was pretty pricey for a 5k with no medal ($40 when I signed up) but I was still excited to try it out and the park it was hosted in is the park I do a lot of my training runs in anyways so I knew it would be a good one to start back up.

Packet pickup started at 6pm that night near the start/finish line of the course and there were a few fun activities. Once you picked up your bib there was a DJ playing fun dance music, glow paint stations, places to buy glowing tutus and tiaras, and a shaved ice truck. There may have been more going on but we got there fairly close to the start of the race and it was a little crowded so we didn't do much wandering around. 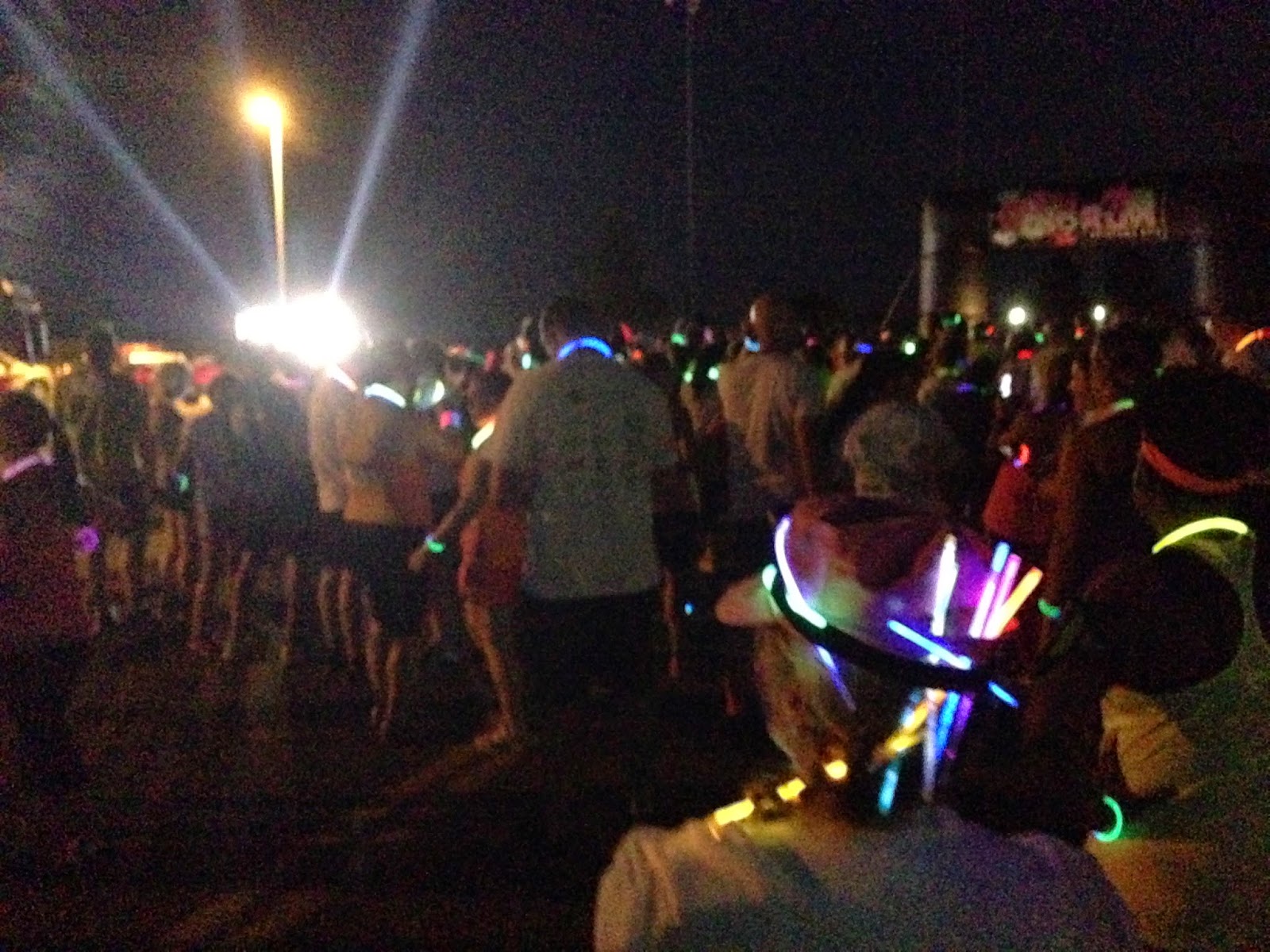 After we picked up our packets we pinned on our bibs and got our glow sticks all lit up and ready to go. I decided not to dress up a lot this race (I'm still feeling a little self-conscious post baby) but I'm pretty sure I will start back up again soon. Katie did dress up and got lots of compliments and it made me really miss running in a tutu! I did have really awesome led laces and some glow face paint. By the way: glow face paint doesn't glow during runs. Lame. 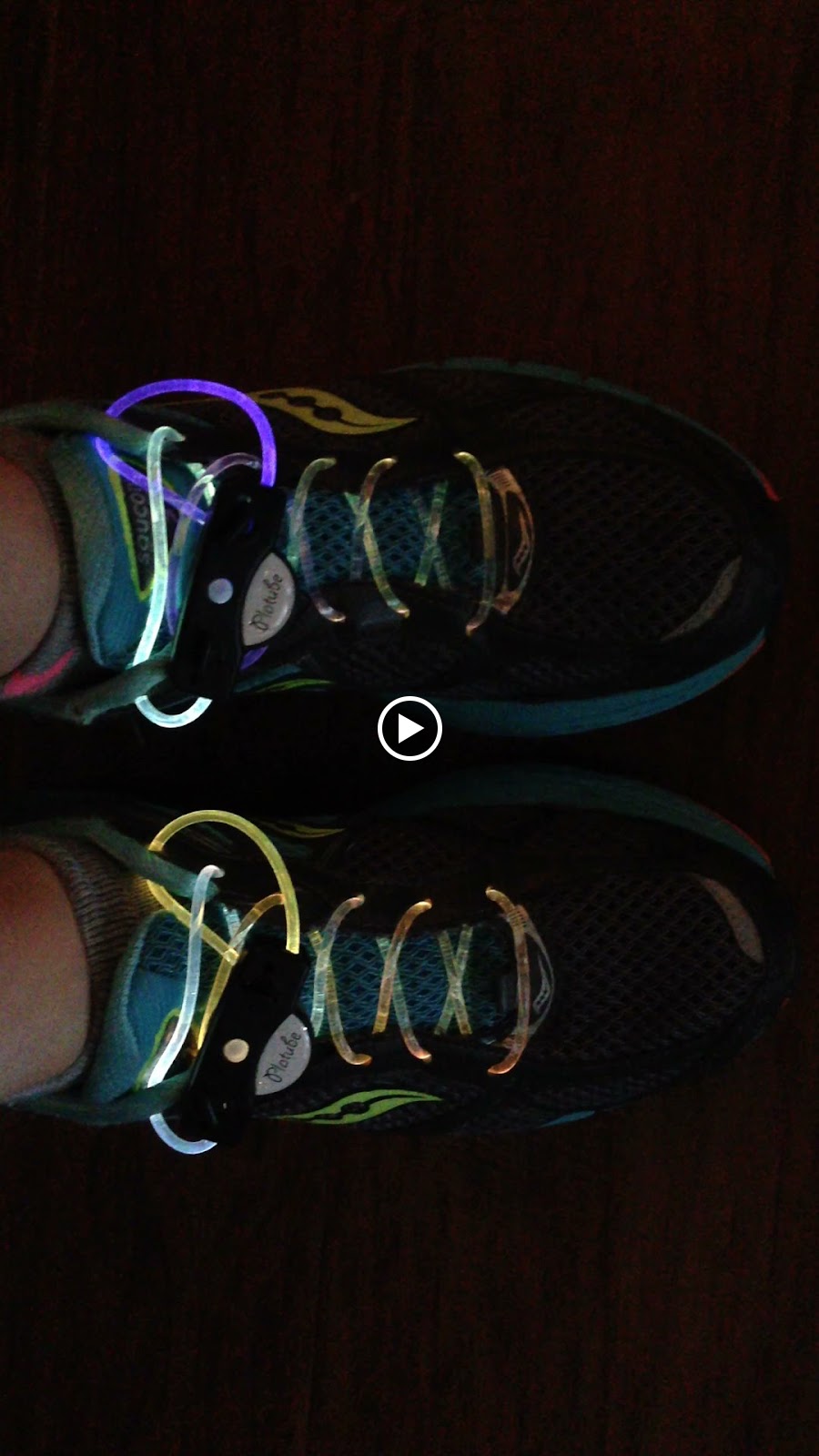 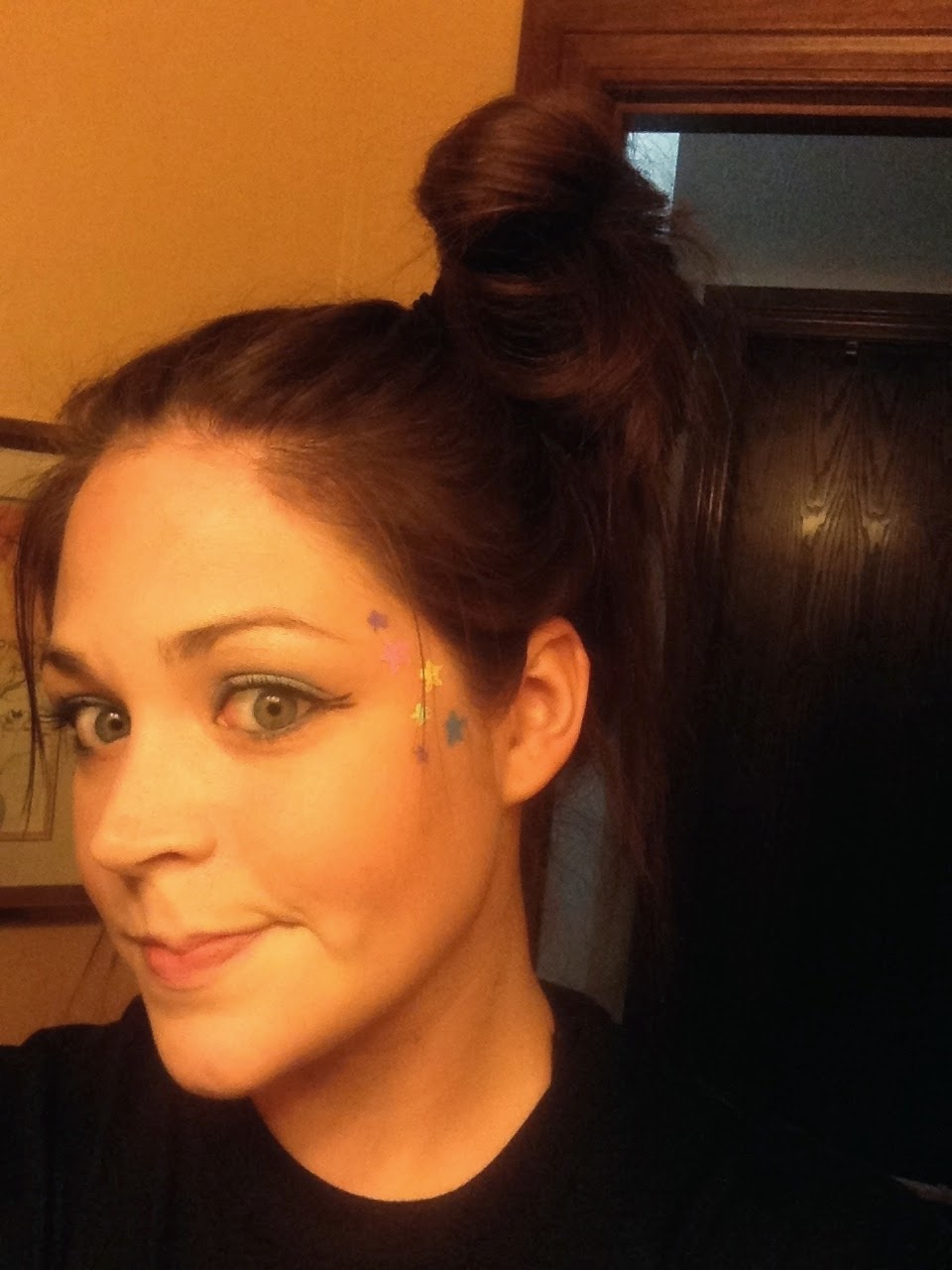 We snapped a bunch of pics and then it was time for the 1 mile race to begin. The race was a little weird because the start and finish line were the same location for both races. The problem with that was that they had the 1 milers run and then made the 5k runners line up and then the 1 milers were coming back into the mob. The DJ saved it when he told the 5k runners to make a tunnel and cheer on the 1 milers but it seemed pretty disorganized. In addition there were no volunteers stationed at the parking lot that connected to the race route so there were people accidentally driving down the race route for the 1 milers. That got straightened out fairly quickly though!

After the last of the 1 milers made it back it was time to start the 5k. The course itself wound around the park through trees and plenty of dark areas and had small rolling hills. It was cool with everyone wearing LED and glow in the dark gear. Before the race, Kevin and I agreed we would walk most of it since he hasn't run at all in over a year and I've only done a few 1 mile bursts. That plan went out the window when Katie wanted to stick to her training plan (she's doing couch to 5k and it had set intervals she was supposed to run that night) and we didn't want to get split up, so we decided to try sticking with her as long as we could.

The course itself was pretty simple, with  two "glow tunnels" along the way (big black tunnels with black lights and bright paint designs) and not much else to make it a glow run. We could hear the DJ for the majority of the race and it was a fun way to cheer us on. There were also volunteers every quarter of a mile or so with flashlights pointing in the right direction (the path was very well marked).

I felt great the first mile or so but then started to have a little trouble keeping up with Katie (she was supposed to run 5 min straight at one point) so we had to slow down and take shorter intervals. We did manage to keep an average pace of about 14:40 overall including stops to take pictures and fix my shoelaces (they were the light up kind and they kept falling off!) several times. We had seriously planned to walk it so I was glad that we managed to jog as much as we did. 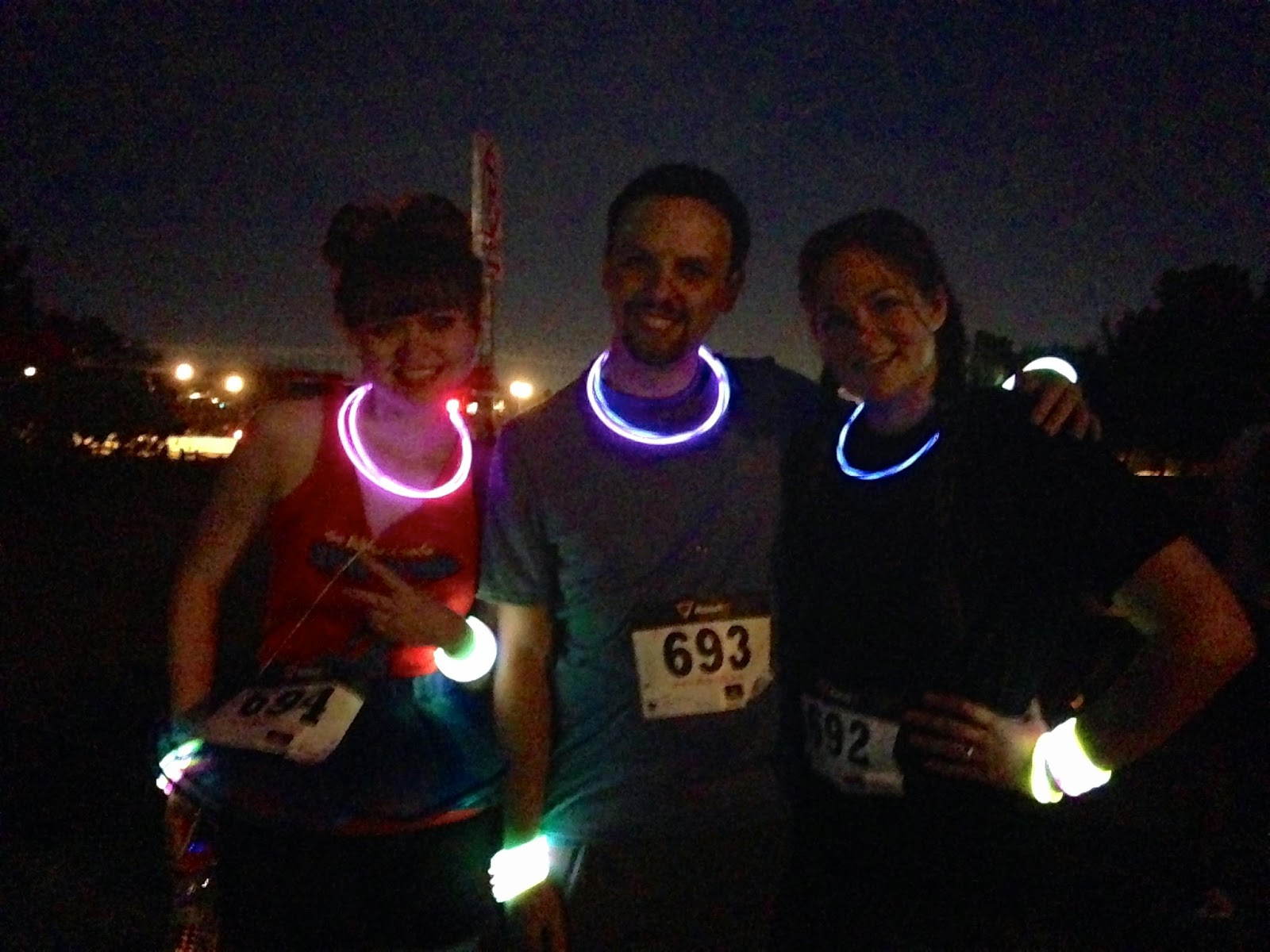 Running next to Kevin again was great. We don't get a lot of time for us as a couple anymore because of the baby so it felt great to be next to him doing something that made me feel like I can only describe as "home". I had no idea how much I missed running in general, but especially having time for the two of us. When we run together we tease each other and talk about the course or silly little things that pop in our heads. Getting too cheesy here sorry, but spending time with him without cell phones, computers, work talk, or baby talk really is the best feeling. I'm one lucky girl! 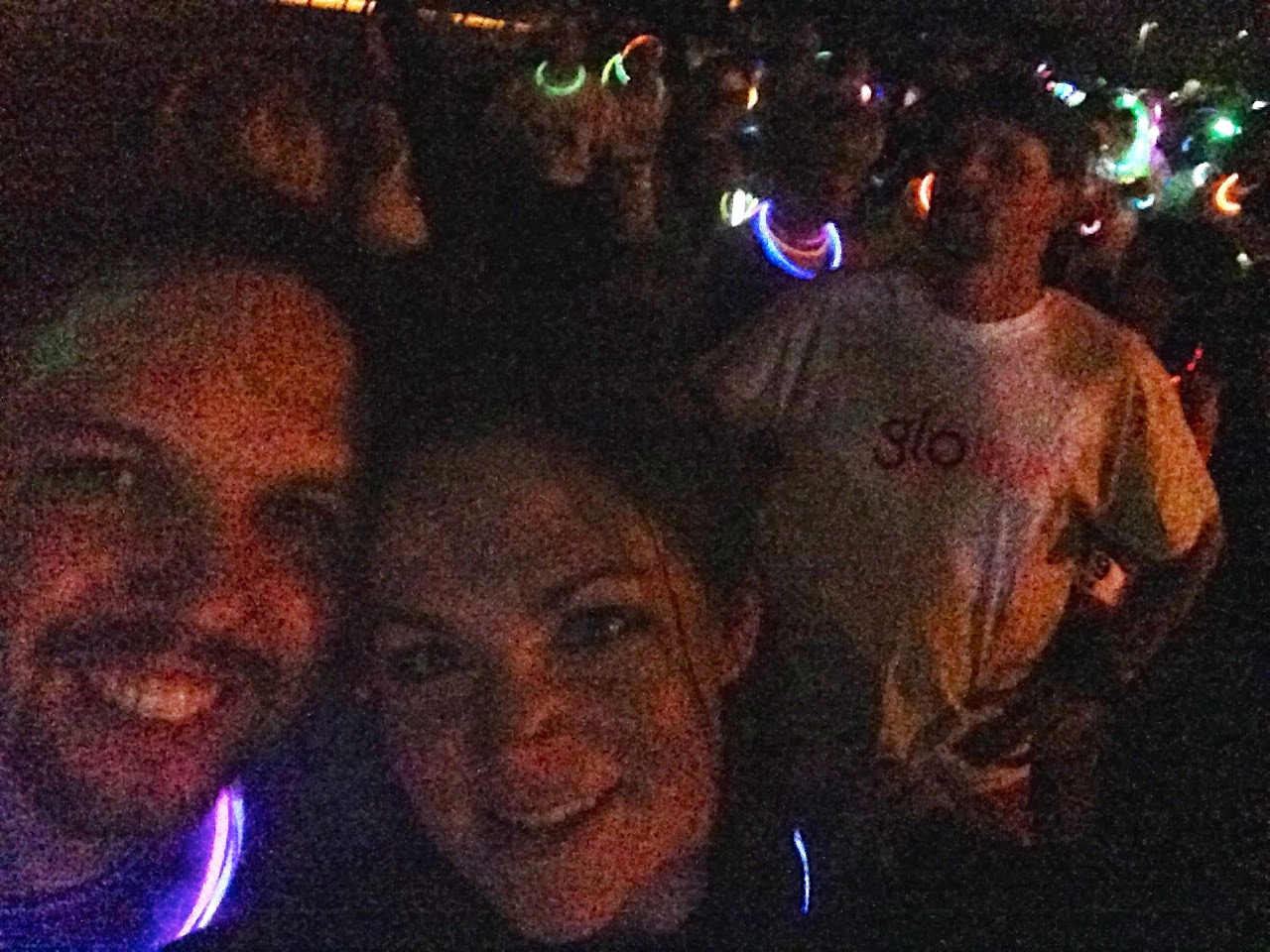 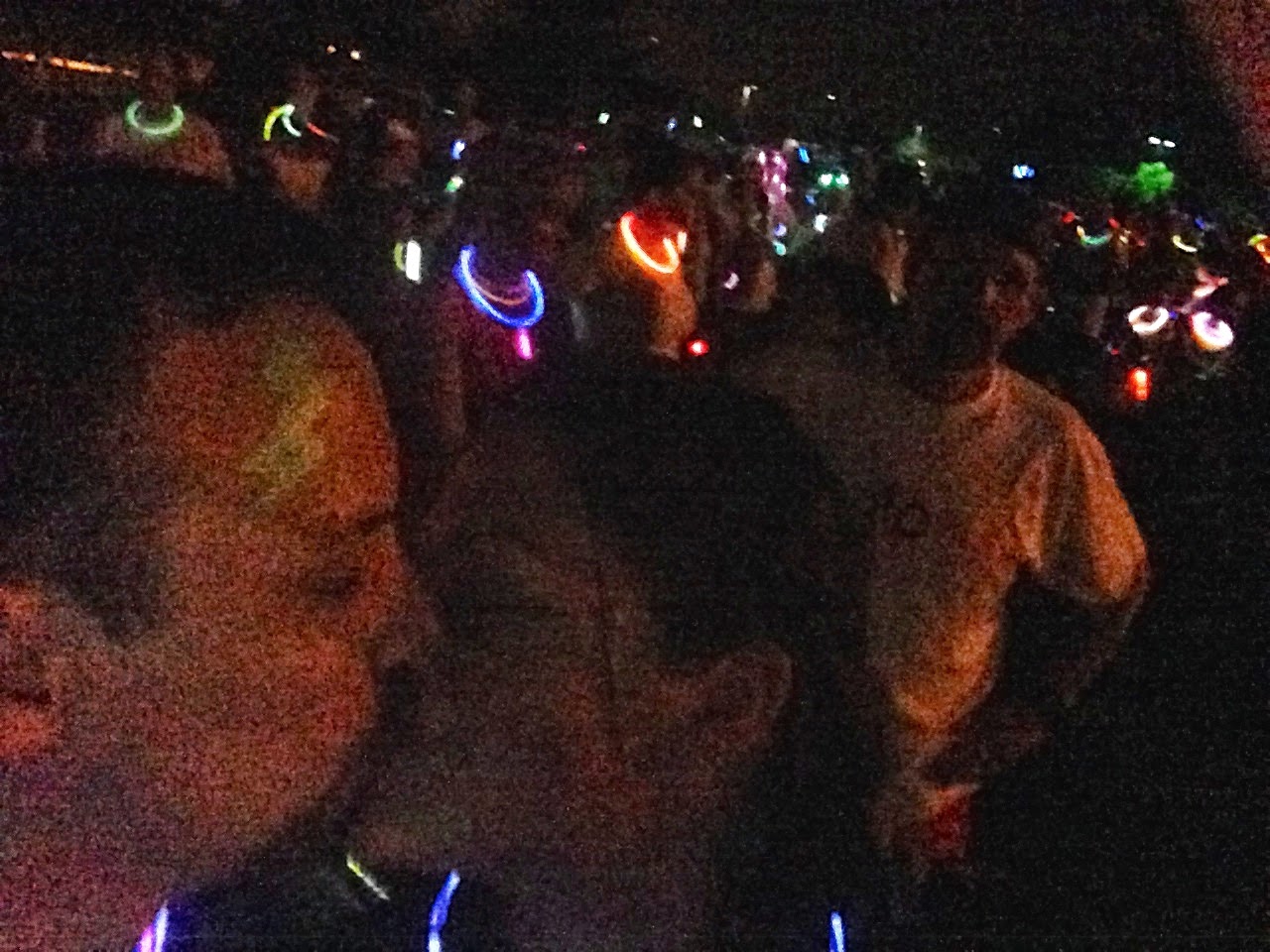 After about 2.5 miles I guess Katie finished her training plan and started to slow down (it has set intervals for a certain amount of time) so we caught up with her and kept together to almost the finish line. She wanted to sprint to the end about a quarter mile away and we waited a little longer. Once we finished we got our finisher ribbons and cheered on other runners behind us.

Overall I had a great time, but there were some things I didn't like, so I'll break it down for you:


Well that wraps up this race recap! I had a blast getting back out there, but I don't think it was the most organized race. I think I'd do it again if they could make a few improvements and/or lower the price. See you soon guys!

I've missed you guys! Sorry it's been so long. My little girl is officially over 6 months old now (wow time flies) and I think I'm actually ready to get back into the world of running again. I thought I was before but hah! lol

*If you don't want to hear about breastfeeding woes, skip this part and know that it says blah blah blah excuse blah blah want to get back out there lol*

I tried running a few times while I was away from the blog but it always ended badly. I couldn't take my allergy meds (still breastfeeding and it decreases your supply) so my asthma hasn't been cooperating. However, my girl is now 6 months old and I'm so proud we made it this long while breastfeeding. I was planning on going a full year (and still hope to), but things have been tricky. I've always had issues with supply and had to supplement with formula from the start (drs orders) but I tried everything to increase my supply. It just never happened. Then I found out my little one has reflux and we started to realize that she does so much better with formula. I know that's not true for most people and I seriously DO recommend you breastfeed if you can, but for us it's always been a struggle because breast milk makes my little one sick. Anyways, long story short, I'm starting back up my allergy medicines now. I've come to the conclusion that running and being a healthy (both emotionally and physically) mom is way more important to my little girls overall health than maybe an extra ounce of breast milk a day. I will still keep breastfeeding and hope to make it to the year mark, but I've finally decided to allow myself to be ok with taking care of myself too.

The point is, I'm really ready to commit to being healthy again and I'd love all the support I can get! Once Audrey is 8 months old (on July 4th), I'm allowed to start running with her. In order to ramp up to running I will be walking at least one mile every day (and hopefully more some days( until that day and I plan to do a 5k on the 4th of July as well. If you are trying to start up exercising again, or maybe doing it for the first time, send me an email and we can harass each other into actually sticking to our goals! Who's with me? Please, PLEASE don't be shy. Let's actually do this!

I really will try to post more I pinky swear! I had no idea how incredibly time consuming having a little baby at home and working with an hour commute each way would be! Eek! Speaking of my little girl, here's some obligatory cute baby (and daddy) pics!