It's been a long time, but I'm finally able to do a race recap for you and I'm super excited so let's get started!

Friday during the day I went to packet pickup. I'm happy to report the packet pickup was super seamless. I really liked how easy it was to pick up packets for my family so they didn't have to skip out on work. Sometimes picking up someone else's packet is a major hassle.

After getting our packets, I checked out the little shop with Color Run merchandise and glow gear and so did Audrey. They had tons of neat stuff like light up wigs, high socks in neons, flashing sunglasses, water bottles, shirts, jackets, and even a cute stuffed unicorn. 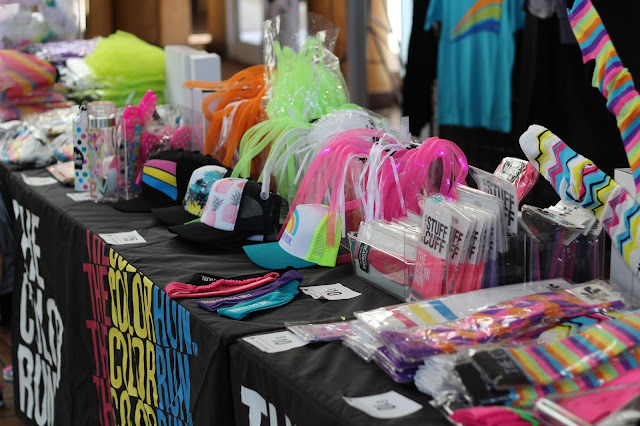 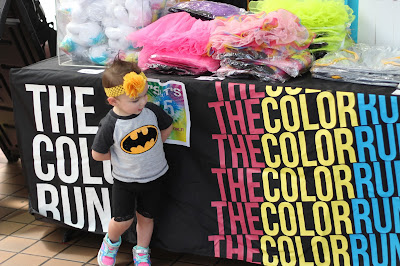 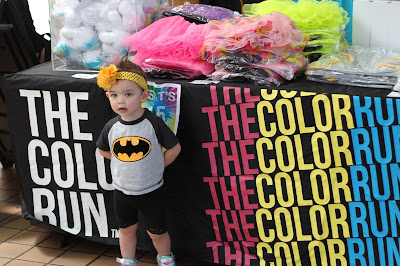 When we got home we went through all of our loot. Inside the packet I found: 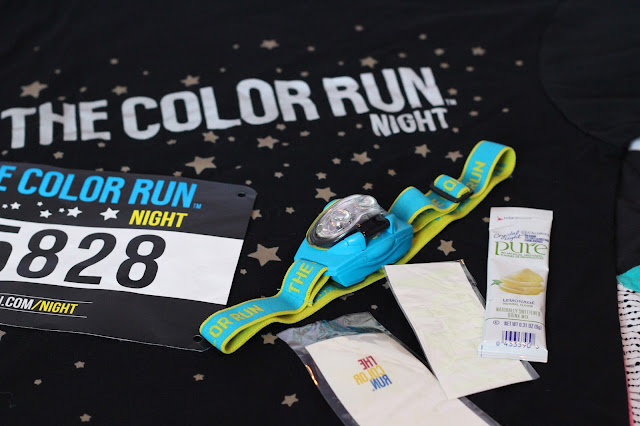 Audrey also got the unicorn which they called a RUNicorn. She is still cuddling it as we speak! 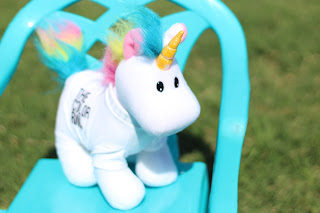 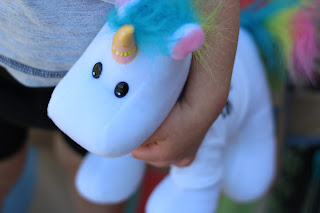 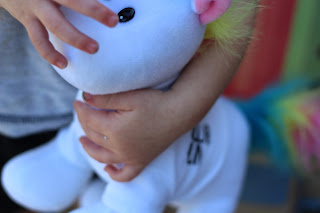 We decided not to bring Audrey along to this race, mostly because we didn't want to ruin the jogging stroller with colorful powder. So the day of the race we dropped off Audrey and headed to the race. There was a lot of photo taking before the race and a general atmosphere of fun. 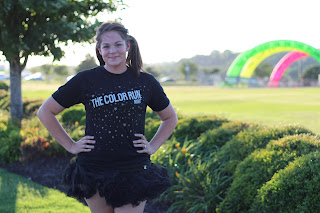 Quick note about wardrobe: Generally people fell into three camps: all white, all black, neons. The people in white glowed the most during the race, the people in black had the paint show up the best, and the people in neon looked fun. I think you can't really go wrong there. Also those headlamps look absolutely ridiculous and it's very hard to take each other seriously in them! 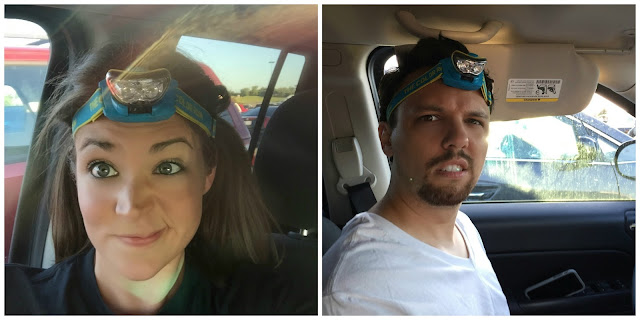 For the size of the race I was a little surprised at how.... anti-climactic it felt. The repeating theme of the night, in my eyes, was a general feeling of waiting for something to happen that never did. When the race was starting there was no massive crowd rushing to the gates, there were a few loud moments when the dj played a good song, but there was a lot of quiet as well. It was also a little weird that the dj was clearly just using an ipod and searching for songs as he went. So like a song would end and he'd say on the mic "um let me find the next one" or "oops I already played that one". It felt unprofessional to me, but everyone was still having a good time.

We of course took some more pre-race selfies! 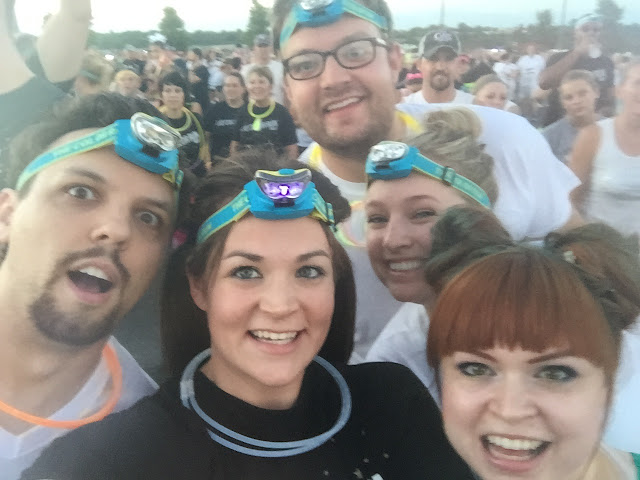 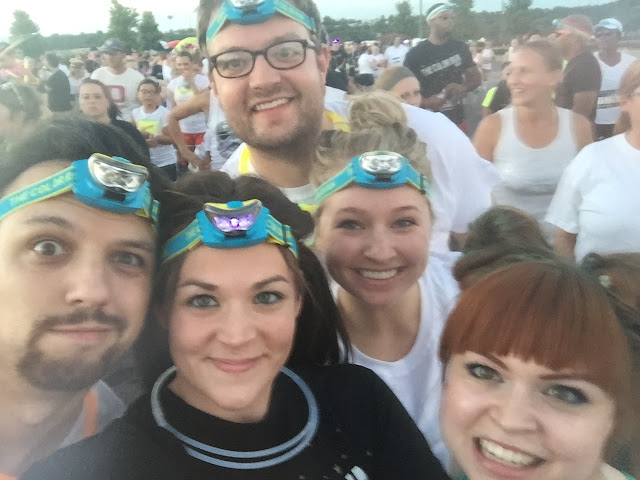 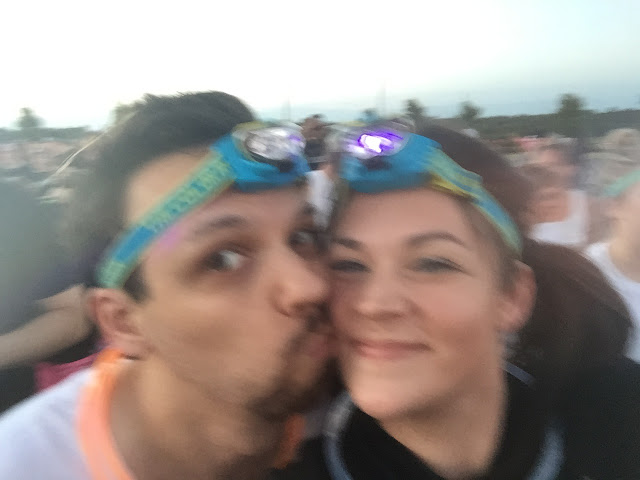 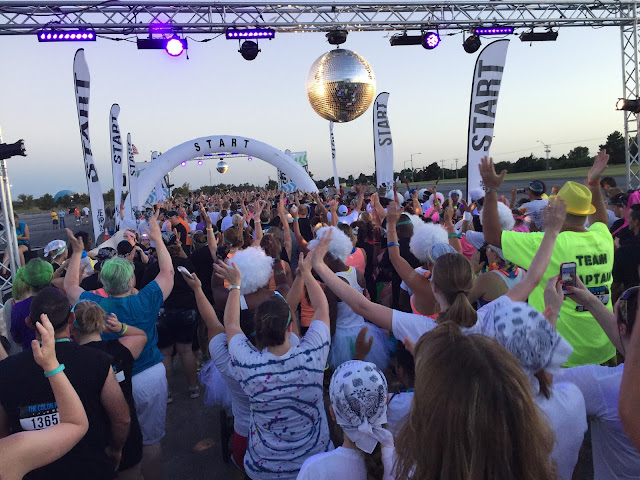 Soon it was time for the race to start. That's another one of those anti-climactic moments. There was no start gun or rush off. People just slowly and queitly walked through the start line. It was very odd.

Kevin planned to actually run this race, so he took off from us a few minutes in and we didn't see him till the end. He literally finished the race in less than half the time it took us! haha. The rest of us were walking the race together. We ran every once in a while for a few minutes, but just tried to have fun walking.

I didn't wear a GPS watch and there were no mile markes so I have no idea how far along things were, but my husband is really good at estimating distances and gave me his best guesses. The first mile had no color stops and was walking across the street and passed a lake. The larger races, such as this one, seem to attract a lot of newbie runners. I love to see newbies out on the course, however that does mean a LOT of traffic jams. If you are a walker at a race, especially in a big group, it's important to stick to one side and not to spread the entire width of the course. There was a lot of that going on so you didn't have any choice but to go at the pace of those around you. In our case it was VERY slow. We embraced it all the same! 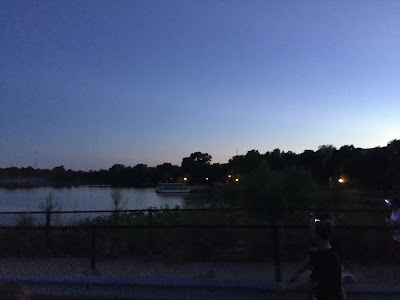 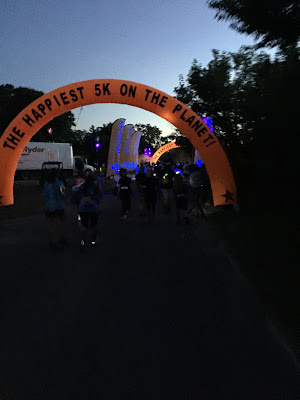 The first color spot came up right around 1 mile and there were 4 spots I believe within the next mile. Each color spot was marked by large neon arches and big sporting event style black lights. I have done Color Me Rad before and I was expecting big splashes of color coming out in clouds at these spots and lots of activity, but it was more like people sprinkling colorful powder out water bottles. It was very low energy. This was both a good thing and a bad thing. At Color Me Rad I had a very hard time with my asthma because there was SO much color in the air. Lots of people at that race complained of color in their mouths or eyes. That was definitely not a problem at this race, but it was also less intense and exciting of an experience. I heard "oh that's it?" a few times. 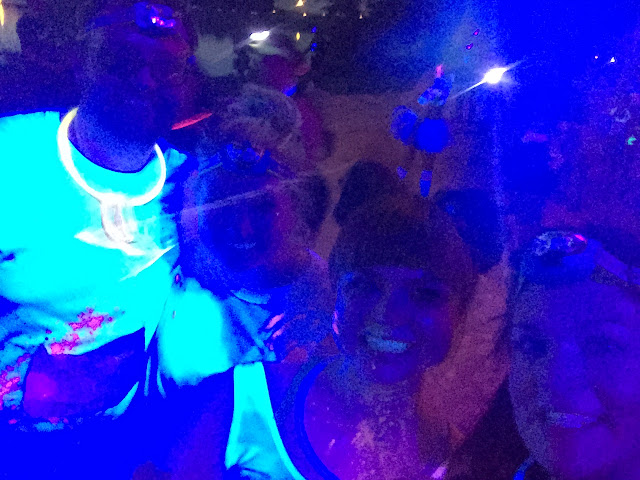 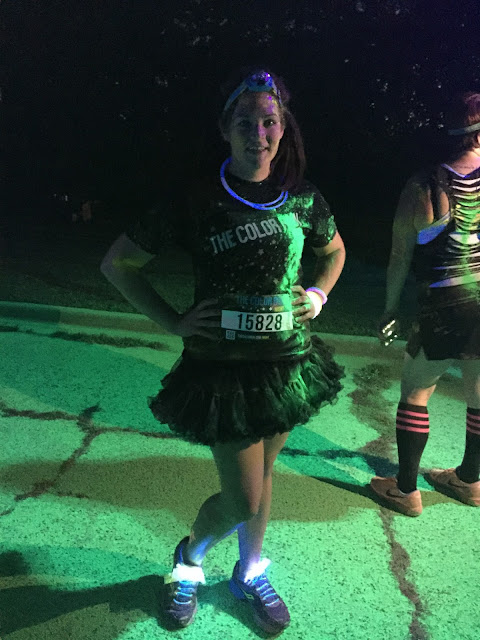 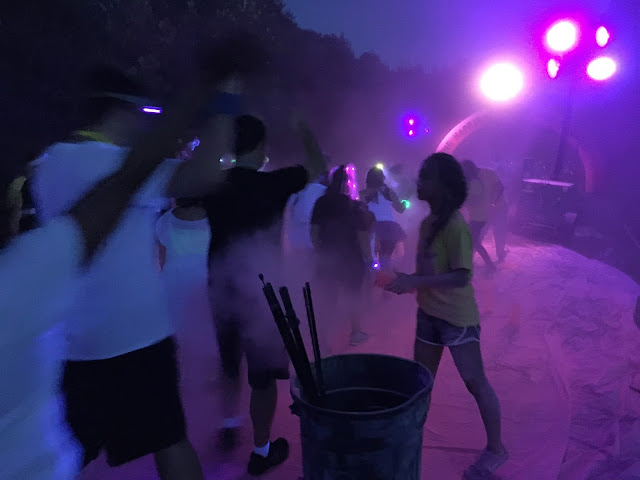 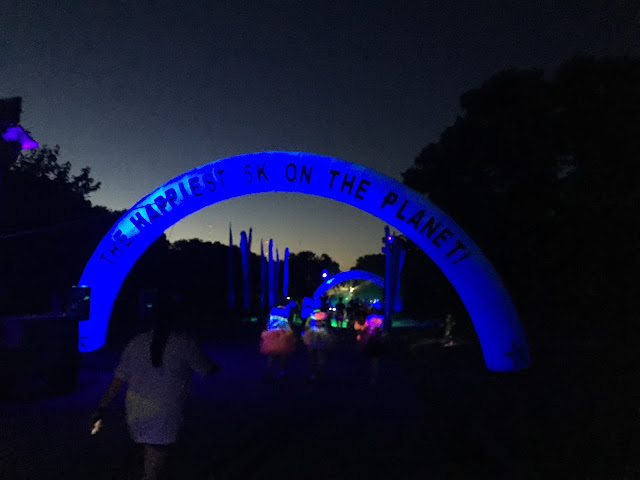 After we passed the first few color spots there was a water stop. It was super crowded and the water was HOT, but they did a great job of keeping the course clear of litter from all the little cups. I'd also like to mention that they didn't have tons of cups lined up ready to go. They were pouring water (only 3 people pouring) as people were coming so that created a very big traffic jam.

Later on there were two more arches that I thought would be color spots but weren't. The first of the two was an area with chalk drawings on the ground that glowed in the black light. Lots of people were stopping to get on the ground for photos. The second was a bit funnier. It was a bubble area and many people thought it was the end of the race, so they would sprint through the arch and then say "oh we have to keep going?".

Finally we passed through the finish line. There was no clouds of color at the finish or crowds of people cheering. It was another awkwardly quiet part of the race that had me saying, "Oh that's it?". We recieved our medals and headed to the after party. I think the after party was where the race did really well. There was much more excitement in this area and we were among some of the last to finish, so my husband says it was even more fun earlier when the crowds were larger. 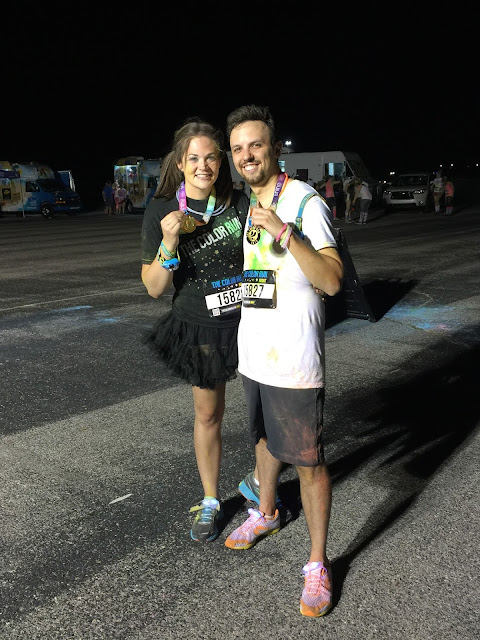 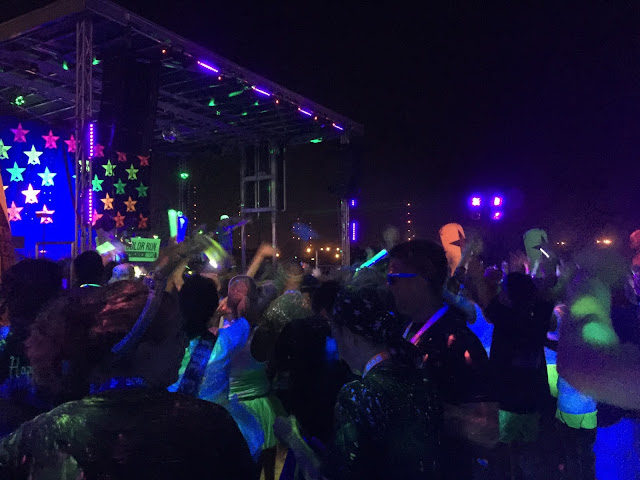 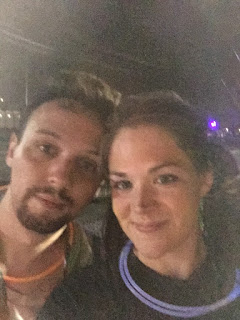 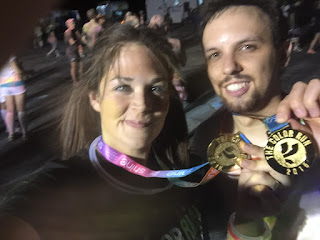 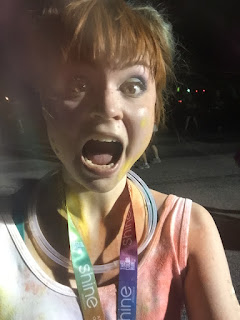 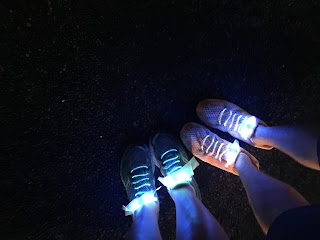 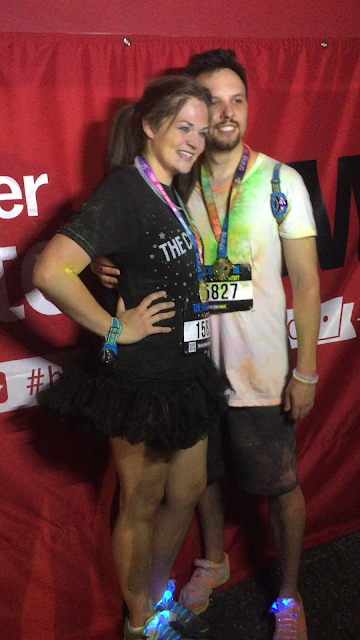 And here's the bling! 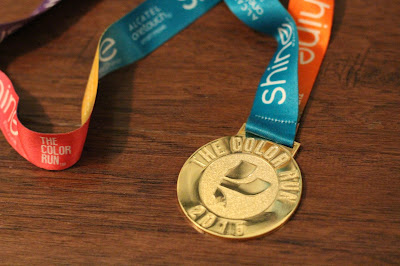 Overall the race was fun, we had a great time as a family, but I am not sure it was worth the cost. I think maybe if you found a deal or discount it would be worth doing, but if you can't maybe not. I felt, for the size of the race and cost of the race, there should have been more professional touches like a real dj or more music and it would've created a much bigger sense of excitement. It wasn't a bad race by any means, but it left me wanting more and I felt it easily could've been done.

I hope that this recap was helpful to any of you considering doing the Color Run Night.

QOTD: Have you ever been to a race and got the feeling "That was it?". What would you have done to improve it?
Posted by Ros at 12:08 PM