Running in tutus/costume has become somewhat of an obsession of mine. It's a fun way to show some spirit while running and trust me it's addictive. I sort of had to wing it for a while because so few posts are out there with running costume ideas, and so I thought I'd add a little page for all my race costumes I've made to give you some ideas: 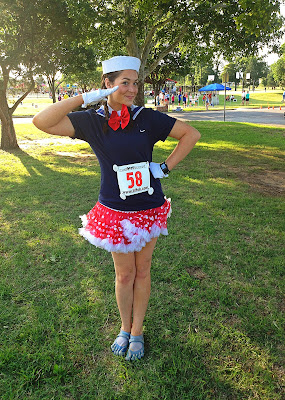 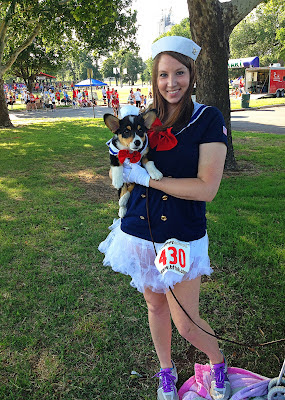 For the 2012 River Run and Dog Jog, a dog race on Memorial day, I went as a sailor with my sister and two puppies. For our costumes we both got navy shirts and used added buttons for flair. We made the colors our of handkerchiefs and just ironed on some ribbon so that it looked more like a sailor collar. We also added bow ties that I made using this tutorial. The dogs both wore collars and bow ties made the same way. We bought gloves and sailor hats at our local costume shop and paired our outfits with tutus that coordinated. Ashley also made the mini sailor hats for the puppies using some weight felt and seriously good crafting skills! 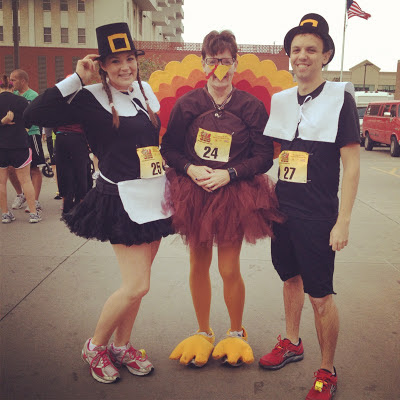 For a thanksgiving day race, we decided to dress up as Pilgrims and my mom went as a turkey. Loved the way the costumes turned out! Mom's was a little tricky to wear in the wind though to beware! Ours were simply black running outfits with felt accessories. All of it was made by my sister! Mom's costume was a brown tutu, gold tights, handmade turkey feet, a handmade, turkey beak, and the best part was the turkey feathers made of a poster-board covered in felt and attached like a backpack. 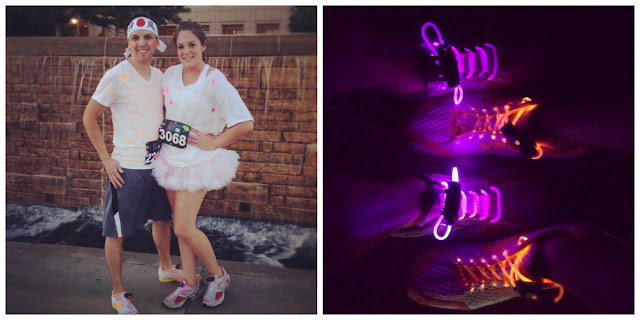 For a glow run ( a night run filled with black lights) I wore I bought a white tutu and white shirt (and Kevin bought a white shirt too) and we splattered all of it with glow paint. Then we bought these awesome led shoe laces to wear too! 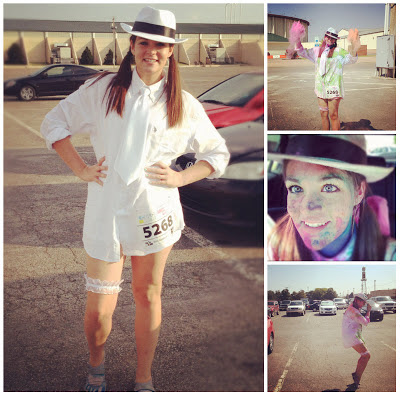 For a color run I wore all white and decided that just white would be boring. So, I went as a gangster. I found a white fedora, bought a cheap white dress shirt (with white sofees underneath) and topped it off with a garter and white tie. I got a lot of compliments and it was one of my fav costumes to wear! 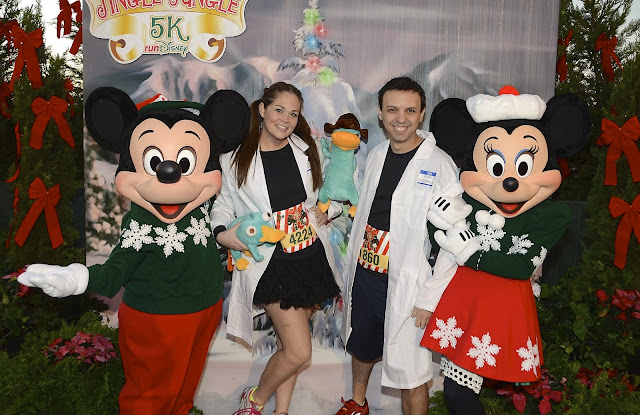 For the 2012 Disney Wine and Dine Mickey's Jingle Jungle 5k My boyfriend and I went as Heinz Doofenshmirtz from phineas and ferb. We wore all black (me in a black tutu as well), a white lab coat purchased at a local party store, name tags with his name, and also carried perry the platypus dolls. Despite our fears, running with a platypus wasn't really that hard for just the short distance. 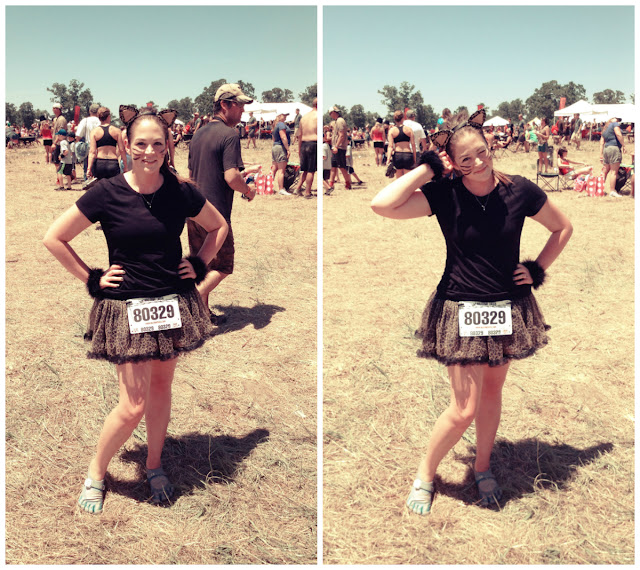 For the Oklahoma Warrior Dash 2012, I wore  a leopard costume. I used furry scrunchies I found at hobby lobby around my wrists, a leopard Tough Girl Tutu, A handmade tail made using crap leopard fabric, stuffing, and a coat hanger, a plain black tee, and cat ears made using felt and a headband. The finishing touch was black makeup whiskers.

This one (above) was my first running tutu for the 2011 Princess Half Marathon. I found the tutu online and wore some tight shorts underneath from RoadRunner Sports. I like to wear compression sleeves for halves so I wore red ones for the race and just matched the outfit with a black running tank for a Minnie Mouse look. I could've easily warn Minnie ears, but I tend to get headaches with stiff headbands. The costume was actually really comfortable and I never even noticed it. 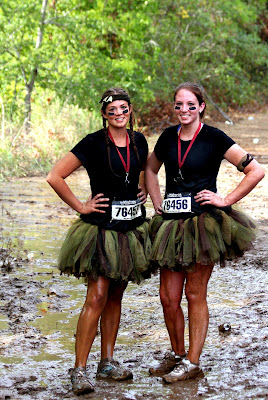 The next big costume I made was for the 2011 Oklahoma Warrior Dash. My sister and I ran this race together so I made us both matching camo tutus. I just picked out a few camo-like colors of tulle and followed a basic online tutorial. We paired it with eye-black stickers (so the eye-black wouldn't smudge in the mud), black running tees, running shorts, and a camo bandana. This costume was also really comfy until we got completely soaked (really close to the end). Then it became pretty heavy and we almost lost our tutus a few times! 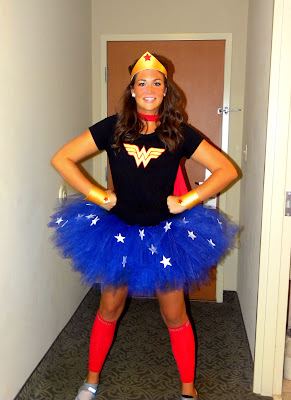 Then came the Wonder Woman costume for a Superhero 5k. I wore a plain black tee with a handmade Wonder Woman logo that I just traced and cut out of adhesive felt. I made the tutu using blue tulle and added some styrofoam white stars. Again I wore my red shin sleeves to look a little like her boots. I also made a superhero cape from a bargain tee by cutting it up. Finally I paired it with cuffs and a crown I made from gold styrofoam and some elastic. The outfit was also really comfy and I got tons of compliments! I think this one was my favorite costume! For the 2012 WDW Family 5k I wore a donald duck costume that was probably my runner-up for favorites. This one was a little more involved. I went online and found yellow footless tights (in case I ended up wearing vibrams- which I forgot to pack!). Next I added a white petticoat. I thought the petticoat looked more like feathers than a homemade tutu. Underneath I wore white spandex shorts. Next I added a plain blue long sleeve running shirt. I glued some large white buttons to safety pins and pinned them to the shirt. It was smart to glue them to pins rather than the shirt because later they worked to hold my bib! After that I made a sailor collar from blue felt by cutting the felt, hot glueing it together and using white tape to add the border. Finally I made a red bow tie using another online tutorial. 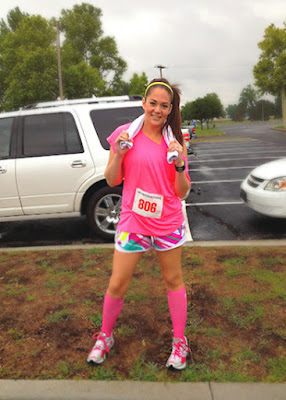 My 80s workout gear was a last minute idea for the Body Shop 5k & 10k event. I wore some neon striped running shorts I already owned, bright colored sports bras, knee socks, an off the shoulder tee, a "sweat towel", and a side pony with a scrunchy. If I could redo it again I'd definitely add leg warmers but I didn't have enough time to make them. The shirt is just a $12 shirt I got from the workout section of target. I bought it 2 sizes two big and cut the neckline up so that it would be an off-the-shoulder tee. It's hard to tell in this pic, but it turned out pretty decent looking for a last minute costume.